The Tao of Booze (Why I once embraced alcoholism)

Note: I wrote this blog years ago in my mid-twenties. I no longer stand by this philosophy, but I’m leaving it up for posterity and to offer an insight into the mind of an alcoholic.

Most people don’t understand alcoholics. Most people view alcoholics as only slightly less despicable than serial killers, rapists, and child pornographers. What people don’t understand is that alcoholism isn’t just a habit. It’s a lifestyle…a philosophy…and it’s not completely insane or necessarily irresponsible. I want to share with you my philosophy on alcoholism. I don’t speak for every alcoholic, but I’m sure most of them have thought similar thoughts.

First I want to mention two reasons why many people can’t understand the appeal of alcoholism. The first reason is, alcohol affects everyone differently. It makes some people feel great but has little to no effect on others. Some people it just makes sick. So if you don’t see what the big appeal of alcohol is, it might be that it doesn’t make you feel as good as it does other people.

The other reason many people don’t understand alcoholics is they grew up in an upper-middle-class family where everybody loved each other, encouraged each other, and supported each other through life’s struggles. Those are the kind of people who say, “I don’t need alcohol to have a good time.” Well, some of our lives sucked shit. Some of us have felt fear far more than we ever felt loved. Some of us got the crap beat out of us our entire childhoods and had little to no emotional or financial support through the rest of life’s struggles. Now we’re buried in debt, working at hard jobs we hate with no prospects for the future except more hard work and no thanks. So hey, if the only good thing that’s going to happen to you all day is either masturbating and/or getting drunk, then you take what you can get. 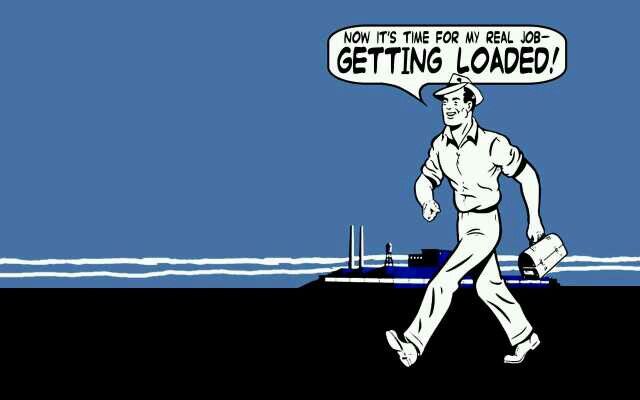 Some people feel great when they drink and like to get drunk after having a shitty day at the office but don’t become alcoholics. You don’t become an alcoholic until passing several mile markers. The first mile marker is when it dawns on you that if it’s great to be drunk some of the time, then it would be even better to be drunk all the time. Another mile marker is when you realize your alcoholism has reached a level where it’s definitely affecting or going to affect your health but you choose to keep doing it anyway.

The big question all this is leading up to is, why? Why allow yourself to pass those mile markers knowing you’re hurting yourself? Why do you need alcohol to be happy? Why can’t you trade the bottle for a positive attitude?

Because, as we’ve already established, life sucks shit. Having a positive attitude doesn’t change that. It just blinds you from the reality of what a horrible world we live in. Alcohol does that too, but that just means alcohol and optimism are separate paths leading to the same place.

A cheerleader would reply to this by saying getting drunk is a way of hiding from the pains of the world. Ah, but you forget, the alcoholic has already admitted to himself that he doesn’t care about his own health and thus his own life. If he’s not worried about his own life then he sure as hell doesn’t give a fuck about the rest of the world, especially since that world abandoned him. The alcoholic accepts responsibility to suffer the consequences of his habit and expects the rest of the world to accept the responsibility to suffer the consequences of its habits.

A cheerleader would reply to this by accusing the drunkard of giving up on life and tell the drunkard he’s morally obligated to pick himself up, rise to the challenges of life, and try to make the most out of life.

What the cheerleader doesn’t understand is that the drunkard has already done all of those things. He survived a shitty life. He stuck with his drinking habit when his lightweight friends quit. And he’s making the most out of life by getting drunk as often as possible. The cheerleader gave up on life when she decided to stop thinking for herself and escape reality through the blindfold of optimism.

But all that aside, what would you have the drunkard do? Where do you want him to go? Where will living a clean life get him? In a more expensive house? In more expensive and more uncomfortable clothes? Will he win the approval of more judgmental friends? Will it get him a more prestigious job to slave away after hours at? Will it get him a bigger car, tickets to sports events, and Chinese takeout? Will it really make him a better person or will it just make him more like you?

What are you living for? If you don’t know the meaning of life then you’re not living for anything. You’re just going through the motions of life and telling yourself that what you’re doing is important so you don’t go insane with uncertainty and guilt over the fact that you’ve tried so hard to do what’s right your whole life but your pretty life is still a failure and the only thing keeping you ending this pointless charade by taking the whole bottle of your antidepressant pills at once is the “faith” in your belief that you guessed the right answer to the question of life even though you never even really guessed; you just copied what everybody else in your culture was doing when you got here.

Motivational speakers don’t have anything to offer an alcoholic but spectacular guesses and lies. Seriously, if you aren’t fanatically religious, wealthy, work at your dream job, are a genius or an addict then I don’t know what you’re doing with your life. There are so many people who wake up in the morning, put on their boring clothes, go to their boring job, come home to their boring house, watch boring television, go to sleep, and repeat this boring, unfulfilling routine every day until they die. Can you honestly tell me their lives wouldn’t be improved by massive quantities of alcohol?

Maybe getting drunk really is the best thing you can do with your life.

Say what you want about alcoholics, but they know there’s supposed to be something more to life. And speaking of life, let’s talk about death. Cheerleaders make themselves look silly by preaching to alcoholics about how alcohol and cigarettes will kill them. Yeah. Alcoholics know that. And we’re fine with it. We’ve come to peace with death and no longer fear it. Please don’t push your fear of death on us. And at any rate, what do you want us to do with all that extra life? What’s so important that we have to stick around another 40 years for? All you’re going to be doing during that time is watching daytime television and being a burden on your family. Personally, I’d just as soon check out early, thank you.

The only obstacle remaining between an alcoholic and a lifetime of contended drinking is God. Does God hate drunkards? Is God going to punish us for all eternity? Any good alcoholic will tell you that Benjamin Franklin put it best when he said, “Beer is proof that God loves us and wants us to be happy.” At any rate, drunkards just have faith that God isn’t a dick.

On the other hand, many alcoholics don’t believe in God, which simplifies the problem even more. And if there’s no afterlife then there are no consequences for our actions in life. This doesn’t mean we have free reign to go kill people. That would be a waste of time that could be better spent drinking as much alcohol as we can before The Big Last Call. And after all, alcohol is the closest a nihilist is getting to Heaven anyway.

Think about it. Life’s short. Fuck it. Pour me another. Let’s have a good time while there’s still time. When you look at it like that, alcoholics are incorrigible optimists.

This entry was posted on Friday, October 30th, 2009 at 11:06 am and tagged with alcoholism, drug abuse, drug intervention, glorifying drug use, health and posted in Drugs and addiction. You can follow any responses to this entry through the RSS 2.0 feed.
« Don’t Give Conspiracy Theorists Your Money
The power of prayer: Spit in one hand and pray in the other, and see which one fills up faster »