Predictions On The New Atheist Movement

Dates aside though, New and Old Atheist’s have the same core ideology (or lack thereof). They believe there is no God, and religion is mythology. At least, that’s what a linguist would tell you, but New Atheism isn’t just a word in a dictionary. It’s a social movement. It’s a meme, and it’s evolving at the speed of society.

After 100 years of evolution, I believe Sam Harris and Richard Dawkins will be rolling in their graves as New Atheism will come to resemble the the ugly religious movements it takes so much pride in distinguishing itself from now.

“1: a set of beliefs concerning the cause, nature, and purpose of the universe, especially (but not exclusively) when considered as the creation of a superhuman agency or agencies, usually involving devotional and ritual observances, and often containing a moral code governing the conduct of human affairs.

2: a specific fundamental set of beliefs and practices generally agreed upon by a number of persons or sects”

I challenge you to go on an Atheist chat board and declare Atheism is a religion and see what happens. Every argument you find on the internet for why Atheism isn’t a religion may be technically true, but outside of the debate chambers something interesting is happening: 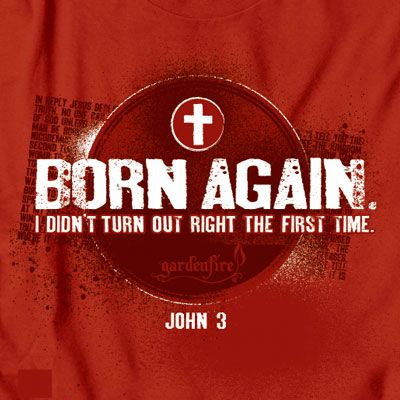 A few pieces of tongue-in-cheek merchandise do not constitute a religion, but what you see here are the first stones being laid in a path that leads to religion. The individuals buying all this Atheist merchandise today may never go all the way down that path. The individuals wearing Atheist shirts, putting Atheist license plates on their cars, listening to Atheist music as they drive to a convention center to hear an Atheist author speak about the book they’ve written on Atheism may just be doing all that as a form of social protest against the oppression of Atheists at the hands of Christians, and that’s great.
I would say, “Long live social progress!” but somewhere out there are legions of idiots who feel lost in this great big, mysterious, lonely, cold universe we live in and are looking for answers and a sense of identity and will gladly latch onto any social movement that will offer them that sense of closure and belonging they’re looking for. Those legions aren’t going to latch onto a social movement or a systemic explanation of the universe because it makes sense. They’re going to latch onto whatever is most popular, and if they see one group of people being smug, condescending assholes to another group of people they’re going to join the smug, condescending assholes because they would rather be the one picking on outsiders than the one being picked on.
Look at Christian culture. 99.9% of Christians don’t act at all remotely like Christ in any way whatsoever. The average Christian has no idea what the Bible even says aside from the quotes printed on whatever sweatshop-made Christian merchandise they bought at their nearest Christian megastore.  And yet they’ll defend their beliefs (or rather, their identity) to the death despite the fact that they don’t even know what it is they believe in, and what they actually believe contradicts what they claim to believe. Those idiots didn’t choose to be Christians because they looked at all the belief systems presented to them, studied them and picked one based on objective reasoning. They just jumped on the first bandwagon that rolled by and refused to get off.
Well, the Christian bandwagon is finally breaking down, and the Atheist bandwagon is picking up speed. Naturally, it’s picking up idiots at an exponential rate. Those idiots are going to drag down Atheism the same way they did Christianity. Atheism may not be a religion today, and there might not be brick and mortar churches of Atheism with ordained Atheist evangelists, but give it time. That day will come, and it’ll probably come sooner than you think.
That might not be a bad thing. In the New Atheist’s scramble to differentiate themselves from old school mythologists few of them have stopped and considered that maybe Atheism should be a religion. Just because old school mythologies committed countless atrocities in the name of God and continue to drive people insane, teach immoral behavior and cripple society that doesn’t necessarily mean Atheism has to end up down the same dead-end road as it evolves into a specific, fundamental set of beliefs and practices generally agreed upon by a number of persons or sects.”
But you can always count on idiots to screw up a good thing. I predict that idiots will hijack and screw up the New Atheism movement. In fact, I reckon that process has already started, and it’s not a matter of when the degeneration will begin but how fast it will progress. It’s only a matter of time before an idiot who identifies as an Atheist beats up and/or kills someone for their opposing beliefs… not because Atheism makes people insane and immoral, but because stupidity makes people insane and immoral, and the number of idiots who are taking advantage of calling themselves Atheists is growing every day.
Update: Turns out I was right. New Atheists are becoming their own worst advocates.

This entry was posted on Wednesday, October 11th, 2017 at 4:42 pm and tagged with atheist movement, atheist predictions, future of atheism, new atheism, new atheists, world without reigion and posted in Atheism. You can follow any responses to this entry through the RSS 2.0 feed.
« Do Agnostics Believe In Intelligent Design?
Are You A “Meta Atheist” Or A “Pop Atheist?” »

One response to “Predictions On The New Atheist Movement”