What I Think About Satan 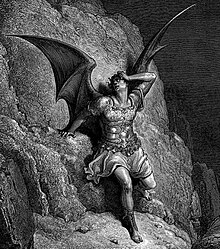 One of my readers E-mailed me recently and asked what I thought about Satan. This was my response:

“I don’t think much about Satan, but I did write a comic about Satanism, which says a lot about how I feel about Satan:

This Was Your Life: The Satanist

The Bible is full of enigmas like Satan that theologians could study and argue about for centuries, but in the end, since the Bible is mythology, devoting one’s time to studying and talking about Satan is tantamount to obsessing over Hades in Greek mythology. You might be able to glean some moral truths out of the stories, but psychology and logic are far better tools for measuring morality.

My Secular Theory on Ethics

Another Attempt at Explaining my Theory on Ethics

Since you asked though, I will say that I always found the idea of Satan illogical. I know the Bible says the wisdom of man is foolishness and God is unknowable, and I used to believe those “truths.” But even then, the idea of Satan seemed suspicious. An all-powerful God wouldn’t choose or need to create an all-evil creature and give it leeway to mislead God’s most precious creation into needless eternal torture.

Some people say Satan and Hell are just the lack of God, but the Bible seems to indicate Satan was a specific individual who God sent to live in exile, which sounds a lot like a story you’d read in Greek mythology.

It’s possible the word “Satan” just means “bad guy,” similar to how the Virgin Mary may have just been a young woman, and we’ve been taking these mistranslations too seriously. Frankly, at the end of the day, the Bible is about as clear about what Satan is, as it is on what the Holy Trinity is. There’s just not enough information to make sense out of either of them. You can come up with a lot of good sounding theories, but ultimately, they’re all just conspiracy theories you either heard or made up.

I identify as an agnostic theist. So not only do I concede the possibility of something existing in the universe that fits some definition of God, I’m also pretty impressed by the evidence, which I explain in this blog:

An Agnostic Take on Intelligent Design

When I look at the stars or diagrams of atoms, I see a grand design so elegant, it has a one-in-infinity chance of existing on accident. Scientific laws look like God’s thumbprint to me, and the universe we live in provides for us, but it doesn’t play favorites or hold grudges. The universe is an impartial and perfect machine. If God’s creation is any reflection of God’s nature, God wouldn’t choose or need to create anything resembling Satan.

Reality is Amazing
An Agnostic Theory on Why God is so Cruel
Do Agnostics Fear Death?

The only person who would invent Satan, or at least the idea of Satan, is a human being who wants to design a theocracy that controls its civilian population by indoctrinating them into believing a mentally and physically abusive mythological state-religion. In other words, the most logical explanation of Satan is that he’s a boogeyman invented to scare children into ostensibly obeying God, but in practice, they’re obeying the leaders of the theocracy.

The Jewish leaders who wrote the Torah would be amazed to see how their state-sponsored boogeyman spread around the world via knock-off versions of their mythology and then diffused into other cultures, creating new hybrid mythologies. I wonder if they’d do it again, knowing how their cult would spread and come back to haunt the nation of Israel.

Ironically, the lesson to be learned from their mistake is that actions have consequences in this life. If that much is true, it sets a precedent that actions could have consequences after death. I fear I may have to pay the piper for some of the things I’ve done, but again, I see nothing in the universe that makes me believe its creator would needlessly torture any of its creations for eternity, let alone appoint one of his exiled rivals as the ruler of Pain Land.

Even if I had done something as morally reprehensible as writing a viral mythology to brainwash people into following and obeying me, I’m confident the universe is reasonable. It’ll more likely give me what I need than take out its anger on me.

In summary, there is no Satan. If there is a God, it’s not Yahweh, and we’re in the best position we can be to hope for the best.”

This entry was posted on Thursday, October 12th, 2017 at 5:45 am and tagged with christian culture, christian mythology, is satan real, The Bible is Mythology, toxic christianity, what is satan, who is satan and posted in The Bible is Mythology. You can follow any responses to this entry through the RSS 2.0 feed.
« 46 Bible Questions Christians Struggle With That Non-Believers Can Answer In 4 Words
10 Ways The Bible Will Drive You Insane »

One response to “What I Think About Satan”