1. The Bible’s archaic, arbitrary code of ethics is ineffective in the real world.

There are a few common sense rules in the Bible that are good, but when you take every single rule into account you find vagueness, contradictions, absurdities, immorality idolized and morality demonized. The rules in the Bible are all over the place. To make matters even worse, the determining factor of whether or not you’re forgiven or punished for violating these vague, contradictory, absurd rules is whether or not you believe in a story.

Here’s why that’s bad. Imagine if you were trying to control a class of 6 year old children and you gave them an arbitrary set of rules and told them that the only way to escape punishment for breaking the rules is to believe in a story. What would happen? Chaos would break out.

Children who are raised their entire life on vague, contradictory, arbitrary rules grow up into adults with a warped perception of reality. They often feel guilty for doing innocent, natural things, believe they deserve to go to Hell, believe in magical spirits and powers, distrust science, fear pleasure and celebrate selflessness to a fault. These are not the habits of an enlightened society. They’re irrational, and they contradict reality. If you live your life according to beliefs that contradict reality you’re going to have a bad time.

Also, children who grow up believing the archaic, haphazard morals in the Bible, will grow up and become politicians who often try to pass laws enforcing or favoring those morals. 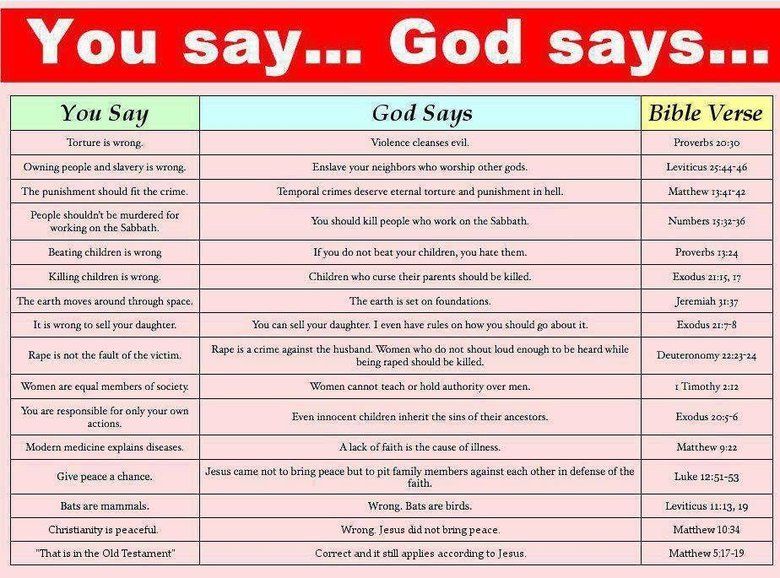 2. The Bible grants you immunity for your crimes.

If you firmly believe that the threat of the death penalty is strong enough to dissuade people from breaking the law then you had better believe that the promise of unconditional release and immunity is strong enough to entice people to break the law. Christian doctrine creates an environment that encourages, or at least excuses, inhumane behavior by removing the perception of consequence for those who believe.

3. Christianity places subservience as one of its top virtues.

This is great for a nation if you want everyone to be slaves. This is terrible for a nation that wants to progress and grow uniformly strong. If you want a nation to excel, you need to teach your children that genius is the highest virtue. A society raised on that value will create beauty you could never imagine possible, but we’ve chosen not to go down that path. We’ve taught people they’re dogs who deserve to be beaten. We’ve taught them that logic is evil and ignorance is strength. It should come as no surprise that every night on the news are stories about people acting like beaten dogs and tearing each other apart. 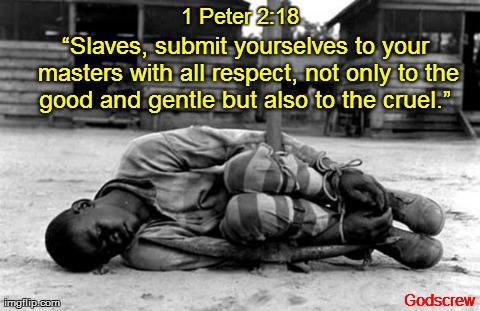 4. Christianity places faith as one of its top virtues.

The bible teaches that blind faith is virtuous and doubt is evil. Every atrocity committed in history was done by people with blind faith in an ideology. Blind faith is a recipe for exploitation and oppression.

On the other hand, every advancement we’ve made in science, government, economics, the humanities, etc. were achieved by doubting, questioning and improving on the ideas our ancestors came up with. Curiosity and doubt open the door to truth, clarity and genius. Christianity takes those keys away from individuals and society as a whole.

5. Religion siphons money from the public that could be spent saving the world.

The teaching of the Bible inspired countless people to regret and deny their sexuality, adopt an austere lifestyle and even revel in suffering. All of that sacrifice is irrational. There’s no sane reason to deny yourself any pleasure or happiness to honor the creator of the universe. All that accomplishes is making the world a less enjoyable place for you and everyone around you.

7. Christianity has a long tradition of holding back scientific progress.

There have been Christians who have made invaluable scientific breakthroughs. For example, a monk named Gregor Mendel proved the existence of genetically inheritable traits. However, Christianity has a long history of stifling scientific thought.

The Catholic church forced Galileo to withdraw and deny his research that proved the Earth is not the center of the universe. Christians regularly pressure public schools to teach children that the creation story in the book of Genesis is real and humanity’s scientific understanding of the universe if false. Christians have opposed the use of condoms and blocked stem cell research. Children have died because Christian parents had faith that God would save their sick child. I’ve even once heard an elderly Christian say that humans didn’t need psychology since the Bible is all you need to solve any problem in the world. When the majority of a population hates the instruments of progress then it becomes much more difficult for that society to progress.

8. Life sucks for everyone else when Christians rule the world.

The Apostle Paul ordered Christians to spread the Gospel until everyone in the world believed in Christianity. Christian missionaries have a good track record of converting entire societies to the point that Christianity became merged with those society’s governments. It happened in Rome, Germany, The United States of America and many other places. All of those governments created laws that oppressed and punished people who didn’t live by Christianity’s archaic, vague ethical code.

Christianity likes to claim it loves everybody, but if you study the history of Christianity you’ll spend an awful lot of time looking at bloody warfare, economic exploitation, the oppression of minorities and slavery. Whenever you have a group who is supposed to be more favored by God than everybody else, and everybody else is so horrible and evil that they deserve to be tortured for eternity, blood will be spilled eventually.

Prayer doesn’t work. You know what does work? Work. That’s how every advancement in human history has ever and will ever happen. Prayer keeps that from happening.

10. The Bible teaches people to loathe themselves.

When you tell an entire nation that their righteousness is like filthy rags and they deserve to burn in Hell you’re going to create a nation of self-loathing people. You won’t have the time or motivation to fulfill your potential if you spend your days loathing yourself. And since people tend to treat others the same way they treat themselves, they’re probably going to treat others worse than they deserve.