My Vision for A Secular, Intellectual Monastery

On my “About” page I state that my long-term goal is to build an intellectual monastery. I’ve written a few blogs and comics explaining why I believe we can cure a lot of major world problems by using the monastic community model on a large scale.  You may be wondering why someone would spend so much time thinking about monasteries. This is the story of how and why I did.

I was born an introvert, which predisposes me to want to be left alone in a quiet place, and I’ve come to believe that the events of the first few months of my life predisposed me to the solitary life even more. I spent that time in an incubator in a hospital preparing for, receiving and recovering from heart surgery resulting from the premature birth of me and my identical twin brother. During that time, pretty much the only human contact I received was from a sweet, elderly nurse hovering above me. So my brain adapted to isolation and minimal sensory stimulation.

I showed up to life late and didn’t want to come out of my shell. So I let my identical twin brother speak for me until our parents caught on and made me go to speech therapy. I knew how to speak. The twin studies my brother and I went through showed we had above-average language comprehension. I just didn’t want to get involved with the drama of life. On the first day of kindergarten, I froze in the doorway to my classroom while all the other students stared at me.

As an adult, I’m a completely well-adjusted, functioning member of society. I spend as much time in crowds as anybody else. I can be the life of the party if I need to. I’ve competed in public speaking competitions and managed a computer help desk in a war zone. I’m good at being social. I just need to get away from the crowds and be alone to recharge my batteries more than the average introvert, and I still can’t watch Imax movies or go to theme parks, because all the commotion and sensory overload gives me a splitting headache and wears me out.

People are born all over the introversion/extroversion scale, and there’s no wrong place to be. That diversity is one of humanity’s greatest strengths. We need to understand our personal nature so we can adapt to it. I enjoy being introverted, and I take advantage of the perks it gives me, like the patience to write books and draw intricate pictures.

Back in elementary school, before I was old enough to articulate all of that, I’d daydream about escaping the daily commotion and living in a tree house in the woods. I wanted an orchard of different trees, and I’d build walkways between them and just never leave the canopy.

When I learned about monasteries in middle school history class, I was hooked immediately. I filled notebooks with floor sketches of monasteries and castles, plotted on grid paper.

But living in a castle wasn’t an option in South Texas. I was stuck in suburbia, which is a never-ending cycle of duties, rules, and drama. In high school, I romanticized about living in an insane asylum. As long as I wasn’t forced to take pills that turned me into a zombie, I could walk around in my pajamas, work on my hobbies and have three hot meals a day. It would be the perfect life.

Unfortunately, I’m too mentally healthy to qualify for a free meal. So in my early twenties, I enlisted in the U.S. Air Force and spent four years stationed in Europe… to my surprise. While I was there I did as much traveling as I could afford and got to see a lot of ancient communal living quarters, which inspired me to study up on the places I couldn’t go.

The history of Europe’s monasteries is set to the backdrop of the history of Europe itself, which is an almost never-ending saga of wars, famines, diseases and economic oppression. Monasteries weren’t immune to these forces, but they were insulated from the worst of it because they were self-sufficient. The monks had everything they needed and barely had to work part-time. Meanwhile, the peasants outside the walls were being used as slave labor and not earning enough to survive. Everyone should be as lucky as the monks, and if everybody had lived like the monks to begin with, most of Europe’s bloodshed and misery never would have happened.

I left Europe and the Air Force in my mid-twenties convinced that a monastery would be the best place in the world for me. So I scoured the internet to see what was available and was unsurprised to find they were almost all religious. This is a deal breaker for me because I believe religions are mythologies, and I don’t want to spend my life dancing around a mythology.

Even if I could play nice, most religious monasteries don’t accept heretics. The ones that do still tend to have schedules and rituals that are an unacceptable waste of time to me. The ones that give you the most freedom cost the most money. There are still a few that will let you stay for free, but you can’t stay long term.

As the internet grew I found more monasteries, but never one that was feasible for me. So I got on with my normal life, commuting back and forth between a house I didn’t own and a job I didn’t like. The longer I lived and worked in suburbia, the more fed up I got with the rat race, and the more time I spent escaping to my ideal monastery in my imagination.

After years of fretting, one day I got fed up and decided that if I could create a monastery in my head, then I could create it in the world. After all, I have opposable thumbs, bipedal legs, and a brain. There’s nothing I can’t do if I work on it long enough. So I threw down the gauntlet and said to myself, “That’s where I want to be. If nobody else has built it yet, then I’ll just build it myself.”So I researched how much it would cost to build a monastery, and I found that it would be at least $500,000 if I hired contractors to do it using standard construction methods. Since I didn’t have any money at all, I researched alternative building materials and floor plans to lower costs. I filled notebooks with sketches and notes until I settled on a circular design using sandbag walls. 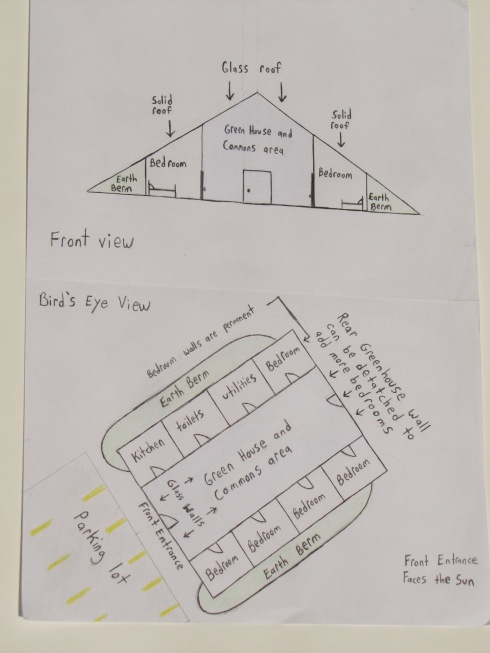 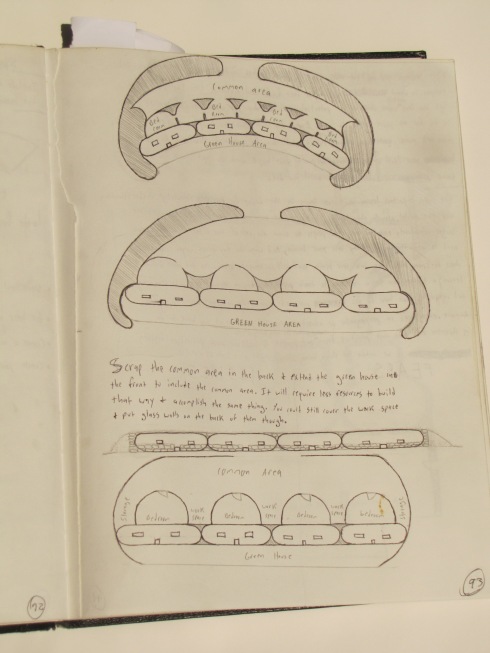 Using the circular floor plan, I only need to build half for it to be functional. I could build that for $250,000 and finish the rest later.

That’s the plan. Now I just need the money. There are a lot of ways I could earn $250,000, and I’ve considered them all. In the end, I chose to meet my goal by writing. Some people would say that’s risky, but it’s what I enjoy doing, and it’s what I’d be doing if I lived in a monastery. This way, if I never get my dream home, at least I’ll have done the other thing I wanted to do.

While I’m writing towards my goal, I’m always thinking about new designs and business plans. Monasteries can be easily modified to suit different purposes, and with enough money, I would build multiple versions, but my ideal monastery, the one I’m going to build first, would operate like a long-stay working hostel for the gifted.

Tenants stay for three months to a year. They work part-time for the monastery, and that covers 100% of their room and board. There are no other schedules or rules, but each tenant has to be actively working on a creative project that has significant value to humanity. The monastery will also host retreats and workshops, and there will be a pay-by-donation campground at the edge of the property to generate passive income.

That’s what I’m working towards and why you can always expect new content on The Wise Sloth. If you want to see some random guy on the internet build an intellectual monastery, here’s how you can help.

I’m not going to nickel and dime my way to building this. I’m very grateful to anyone who wants to throw me tip money to show your support, but I would encourage you to give that to The Khan Academy instead. I may never get my monastery, but they’re providing free online education to the world. The world won’t change until it’s educated.  Every nickel and dime they get makes the world less stupid, and that can’t come quick enough.

In lieu of a donation, you can tell your friends about the Wise Sloth and share your favorite Wise Sloth blog on social media. If you’ve read this far, thank you for spending your time with me. You can look forward to seeing more thought-provoking posts on The Wise Sloth, and eventually, you’ll get to watch me build my monastery.

This entry was posted on Tuesday, September 26th, 2017 at 12:13 pm and tagged with autobiographical, communal living, economic reform, how to save the world, intellectual monastery, life story, monastery designs, monastic life, secular monastery, sustainable building, sustainable living, sustainable monastery and posted in My goals, My life stories. You can follow any responses to this entry through the RSS 2.0 feed.
« Why Do I Write The Wise Sloth Blog?
My Quest To Build A Perpetual Motion Machine »

One response to “My Vision for A Secular, Intellectual Monastery”