The Mythology Test (Does your religion pass?) 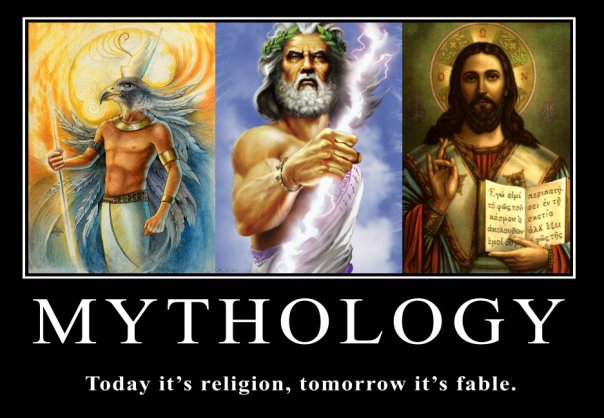 A myth is a story told by a specific culture that explains nature, history, and customs. Myths tend to be ethnocentric and scientifically inaccurate. Mythology is the collected myths of a culture. If you can find examples of at least half the items on this list in a religious book, then that book fits the definition of mythology.

1: Are there credible first-hand sources that can verify the authenticity of the events described in the book?

2: Does it have a scientifically inaccurate creation story?

3: Does it have any other scientifically or historically inaccurate events or statements?

4: Does it give supernatural explanations for natural phenomenon?

5: Does it say supernatural phenomenon exist which have never been recorded by scientific instruments?

6: Does it contain talking animals?

7: Does it contain numerology?

8: Does it advocate or condone animal or human sacrifices?

9: Does it contain multiple Gods?

10: Does it have a hero who saves the world?

11: Does it contain a demigod hero who was born from a virgin?

12: Does God or other supernatural beings have human or animal body parts?

13: Does God or other supernatural beings possess tools used by the author’s culture?

14: Does God or other supernatural beings behave like a member of the author’s culture?

15: Does God or other supernatural beings have names similar to those used in the author’s culture?

16: Is the author’s civilization the most important group of people in the world to God?

17: Do the lessons and rules in the book reflect the values of the author’s culture?

18: Does it command you to believe and hold onto the teachings in the book?

19: Does it include permission or commandments to kill certain people?

20: Does it include permission or commandments to take other people’s land and property?

21: Does it condone slavery?

22: Does it have rules regarding property rights, prices, and taxes?

23: Does it contain rules or statements that make women second-class citizens?

24: Does it say the government should be a theocracy?

25: Does it give political power to religious leaders?

26: Does it tell you to give money to God’s spokesmen?