4 Reasons Terrorism Doesn’t Work And 4 Alternatives That Do

1: Governments already kill more of their own citizens than you can.

Every country locks its own civilians in prisons for nonviolent, victimless crimes where, with few exceptions, they’re raped and beaten until they’re thrown out in the streets with felony convictions that ruin the rest of their lives. Every country sells tobacco, alcohol, and toxic food to their civilians. They also enforce laws that prevent the poor from being able to afford the medicine they’ll need to save their lives after getting sick from the poisonous food they bought at the grocery store. To make life even scarier and more impossible, most governments set the minimum wage below the poverty level.

It would take an army to kill as many civilians as those countries let die every year. It would be illogical to expect terrorism to hold any leverage over countries that make a full-time job out of terrorizing and slaughtering their own population.

2: You will be killed in retaliation to justify war spending.

Attacking a world superpower is tantamount to personal and ideological suicide. When you attack a superpower, it will attack back. Period. There’s no question about that. Even if a terrorist kills him/herself in their attack, the superpower will still need to attack somebody in retaliation. So they’ll invest billions of dollars into killing you, not because they even care about your ideology but because you went out of your way to give them an excuse to kill someone for money.

3: Everyone you know and love will be killed in retaliation.

And since the largest, most powerful militaries in the world are riddled with bureaucracy, inefficiency, and un-accountability they’re probably going to end up imprisoning and bombing more of your innocent neighbors than your actual associates. If/when/before that happens, you really have to take a step back and ask yourself what terrorism really accomplishes. It just sets in motion a domino effect of murder and mayhem until there’s nobody left to be angry at. The only people who really win are the bullet and bomb merchants.

If you truly have an ideology worth spreading, the worst thing you could possibly do is kill a bunch of innocent civilians. All that’s going to accomplish is getting you and a significant number of like-minded individuals killed, and your ideas are going to die with you.

4: You will make the world hate and reject your ideology. 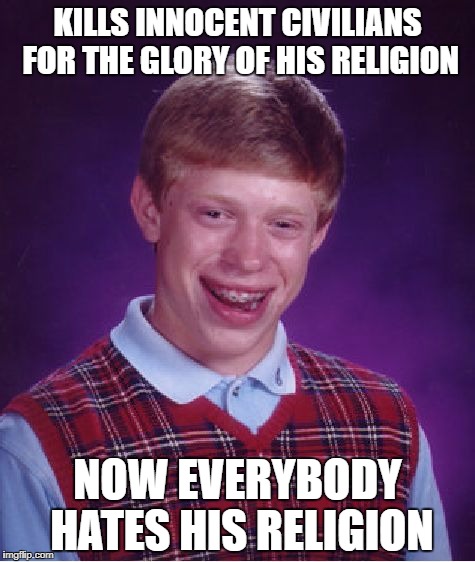 Some terrorists kill themselves and other people because they believe they’ve been pushed up against the wall. Terrorists say they were forced to use violence as a last resort against overwhelming odds. That’s the line we hear, anyway, but when have the police ever raided a terrorist’s bomb-shack and found a door-length list hanging on the wall of every other method the terrorists had tried before finally resorting to violence? Never. Terrorism isn’t the last resort of courageous men. It’s the first idea of uncreative fools. Here are a few ideas that have worked for other people, which you and your organization should consider trying before resorting to violence:

4 ALTERNATIVES TO TERRORISM THAT DO WORK

Maybe you have a righteous ideology that you want your government to adopt. Killing innocent people will obligate politicians to reject your ideology. However, history shows that nothing motivates politicians better than money. Instead of funding terrorist training camps, just fund a politician’s political campaign. Even if your ideology doesn’t make any sense and is blatantly in the disinterest of the common citizen, you can still get a politician to sign legislation that will force your ideology onto others. Why do you think America cares so much about Israel? It’s not because America loves Jews. It’s because American politicians love Jewish campaign donations and business connections.

The Catholic church tried to spread Christianity by the sword. Now the Crusades are remembered by believers and non-believers alike as a prime historical example of FAIL. However, Christianity still spread all the way around the globe because the Christians changed their tactics. They sent missionaries to foreign lands to set up schools, hospitals, orphanages and poor houses. The locals didn’t (usually) fight off the missionaries. The locals came to them. Then, once the locals were lured inside the church the Christians pulled a bait-and-switch and pushed their manifesto on them. Hundreds of years later, Africans, Hawaiians, Maoris, Alaskans, Native Americans and countless other ethnic groups are still worshiping the God who stole their land and erased their culture.

You don’t have to kill your enemy to defeat them. Ultimately, what’s your enemy? Your enemy is the ideas in people’s minds. Defeat the ideas and you convert your enemies into your allies. Then you win twice.

If you have an ideology worth killing/dying for then you must have a giant manifesto detailing your cause, right? If you don’t, then you have to ask yourself what you’re killing/dying for. How do you spread an idea? You put it into a book and then circulate copies of that book. Your money would be better spent on ink than bullets. You don’t even have to be subtle about the fact that you’re spreading propaganda with a bait-and-switch agenda. Just make it cute and funny. If you want to get into people’s minds then DO get into their books and television; DON’T kill them.

Joseph Smith had an ideology he wanted to spread. He was killed for his beliefs, and his followers were brutally persecuted by Christians. Afterwards, his followers didn’t start burning churches and attacking government buildings. They moved out into the country and built a new nation based on their ideals. Unfortunately for them, the United States forced them to accept annexation as a state instead of being able to start their own country, but even after that happened they still didn’t start burning churches and blowing up government buildings. They set up schools in places Christians had already done the groundwork of wiping out the local culture. They sent missionaries door to door all over the world to spread their manifesto and convert people’s minds by talking to them, and they’ve had far more success that way than violence could have ever achieved. They haven’t taken over the world yet, but that’s no reason to start killing people. Point in fact, at the time of writing this a Mormon is running for president of the country that wouldn’t let Utah be its own country. Regardless of whether Utah is a state or a country, it’s still a stronghold of the Latter-day Saints, and it became that way through hard work, not violence.

This entry was posted on Saturday, October 14th, 2017 at 1:47 pm and tagged with Christianity is Harmful to Society, how to save the world, military, political reform, terrorism, war with america and posted in Be Better People, Military Philosophy. You can follow any responses to this entry through the RSS 2.0 feed.
« 10 Signs You Should Stop Pretending To Be Christian
American Cops, You’re Delusional If You Don’t Understand Why Civilians Hate You »