My Theory On Common Sense

It’s self-evident that the majority of human beings aren’t geniuses. If you’ve ever worked in the food service or retail industries, you probably feel surrounded by idiots who lack basic common sense. On the micro level, this can make one’s personal life infuriatingly stressful. On the macro level, if humanity doesn’t raise its intellectual bar across the board, it’s only a matter of time before we exterminate ourselves. So what is common sense, and how does one achieve the first step in the path to enlightenment? To begin answering these questions, we need to go down the Wikipedia rabbit hole of definitions.

“Common sense refers to plain, self-evident truths or conventional wisdom that one needs no sophistication to grasp and no proof to accept precisely because they accorded so well with the basic (common sense) intellectual capacities and experiences of the whole social body”

In other words, common sense is having a basic understanding of reality, and analyzing it logically to draw accurate conclusions. This is similar to “intuition:”

“Intuition is the ability to (seemingly) acquire knowledge without proof, evidence, or conscious reasoning, or without understanding how the knowledge was acquired. Different writers give the word “intuition” a great variety of different meanings, ranging from direct access to unconscious knowledge, unconscious cognition, inner sensing, inner insight to unconscious pattern-recognition and the ability to understand something instinctively, without the need for conscious reasoning.

I added the word “seemingly,” because knowledge and reasoning don’t come from a magic hole in your head. Your brain is a cosmic supercomputer capable of putting two and two together without your full conscious attention. You don’t have to ponder if it’s safe to walk in front of moving traffic. Your brain can use common sense to solve that problem instantly and give you the answer.

The two common denominators between “common sense” and “intuition” are that they’re both dependent on an accurate perception of reality and rational thinking.

“Reality is the state of things as they actually exist, as opposed to an idealistic or notional idea of them. Reality includes everything that is and has been, whether or not it is observable or comprehensible.”

“Rationality is the quality or state of being rational – that is, being based on or agreeable to reason. Rationality implies the conformity of one’s beliefs with one’s reasons to believe, and of one’s actions with one’s reasons for action. To determine what behavior is the most rational, one needs to make several key assumptions, and also needs a quantifiable formulation of the problem. When the goal or problem involves making a decision, rationality factors in all information that is available (e.g. complete or incomplete knowledge). Collectively, the formulation and background assumptions are the model within which rationality applies.”

“Sanity refers to the soundness, rationality and healthiness of the human mind, as opposed to insanity.

If you know what is true, and you combine factual premises logically, you can calculate true conclusions. When you do this subconsciously, you’re using common sense. This means the opposite of common sense lies somewhere between “irrationality,” “superstition,” and “delusion,” all of which fit the definition of “thought disorders…” or, in other words, insanity.

“Irrationality is cognition, thinking, talking, or acting without inclusion of rationality. It is more specifically described as an action or opinion given through inadequate use of reason, or through emotional distress or cognitive deficiency. The term is used, usually pejoratively, to describe thinking and actions that are, or appear to be, less useful, or more illogical than other more rational alternatives.

“Superstition is a pejorative term for any belief or practice that is irrational – i.e., it arises from ignorance, a misunderstanding of science or causality, a positive belief in fate or magic, or fear of that which is unknown. ‘Superstition’ also refers to religious beliefs or actions arising from irrationality.”

“A delusion is a mistaken belief that is held with strong conviction even when presented with superior evidence to the contrary. As a pathology, it is distinct from a belief based on false or incomplete information, confabulation, dogma, illusion, or some other misleading effects of perception. Although non-specific concepts of madness have been around for several thousand years, the psychiatrist and philosopher Karl Jaspers was the first to define the three main criteria for a belief to be considered delusional in his 1913 book General Psychopathology. These criteria are:

1: certainty (held with absolute conviction)
2: incorrigibility (not changeable by compelling counterargument or proof to the contrary)
3: impossibility or falsity of content (implausible, bizarre, or patently untrue)”

When you put all these definitions together, “common sense” equates to the most basic level of cognitive requirements necessary to constitute sanity. People who lack common sense haven’t put in the minimum effort to developing a healthy, rational mind.

If these statements are true, then the steps to achieving the highest level of sanity are the same for achieving genius. I’ve already covered those steps in my post, “10 Steps To Becoming A Genius,” but I’ll summarize the basics into seven steps.

1: Be curious, and learn as much as you can.

The less you know, the less information you can draw on to make logical conclusions. The amount of knowledge you’ll horde by the end of your life will be proportional to your desire to learn. If you don’t thirst for knowledge and wisdom, you simply won’t pick it up. You’ll fill your time making irrational decisions, defending delusional beliefs, and suffering the consequences.

Before you start patting yourself on the back for being genius enough to stay out of traffic, understand that nobody is omnipotent or perfectly rational. Even if you could memorize every Wikipedia article, our brains are hardwired to take subconscious mental shortcuts based on generalizations. These often lead to conclusions and actions that seem logical in the short-term, but are counterproductive in the grander scheme. We can resist these inclinations, but first you need the humility to admit your ignorance. 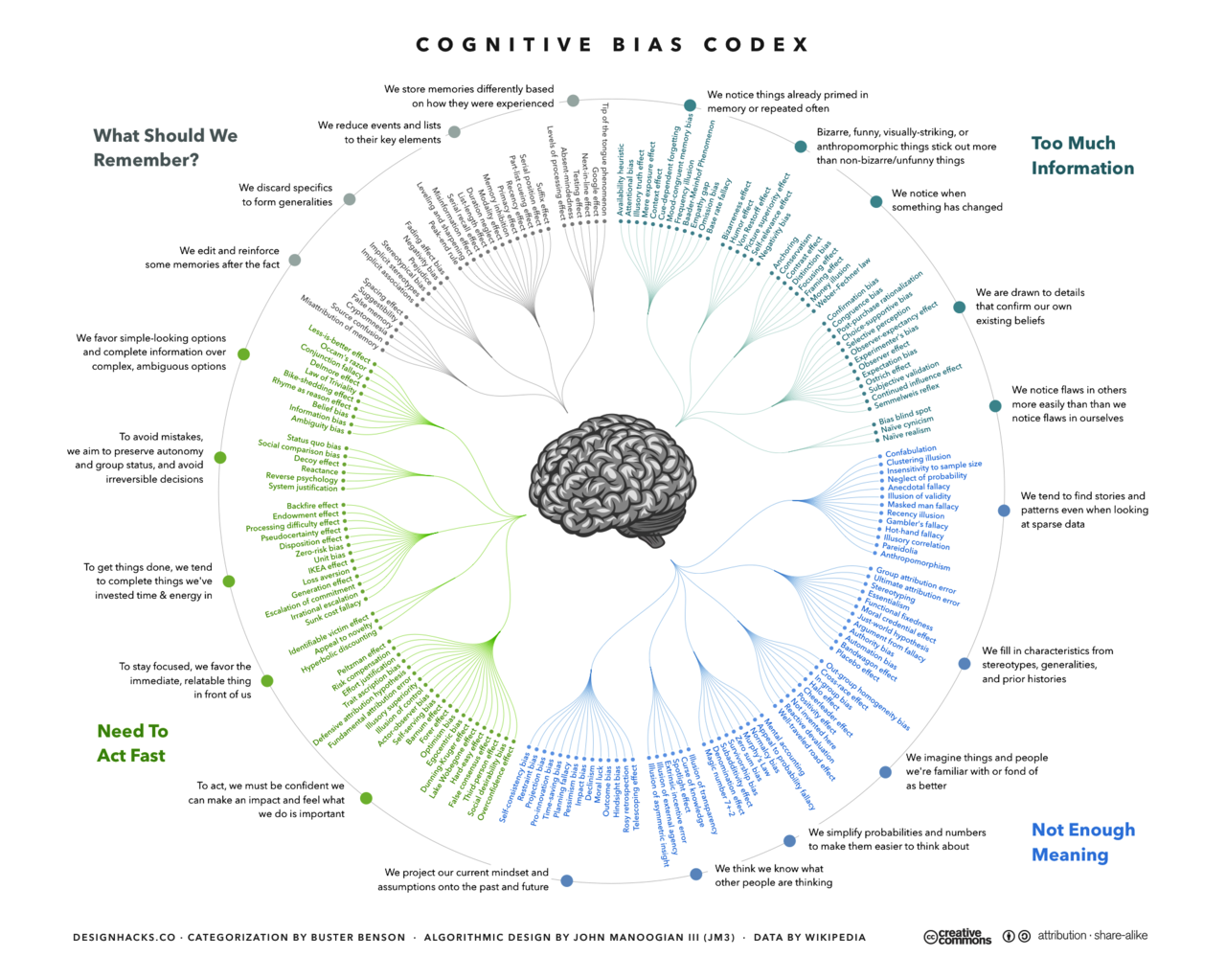 Some truths are subjective, but most are objective and can be confirmed by evidence and logic.  Even religion isn’t a mere matter of personal choice. When put to the test, most, if not all, religions fit the definition of mythology. Ignoring the evidence is delusional. The more emotionally you deny the evidence, the more you exhibit symptoms of insanity.

You can’t complete the process of arriving at objective truth if you value your subjective desires more than objective evidence. This makes respect for the scientific method a prerequisite to sanity and common sense.

4: Use rules to think rationally.

The Scientific Method wasn’t invented by evil Atheists who were tricked by the Devil into misleading humanity from truth. It was invented by people (including religious and non-religious ones) looking for a way to determine, verify, and refine truth. Over the centuries, humans have discovered a slew of logic and critical thinking skills you  must use to separate truth from falsity.

The one simple trick to mastering sanity is: THOUSANDS OF HOURS OF HARD WORK. If that seems like a lot to wrap your brain around, the least you can do is make a habit of asking, “why?” When you experience something you don’t understand, ask why it happened. If someone tells you something, ask why it’s true. Ask why it’s false. If you never stop asking, “why?” then you will never stop finding answers and moving closer to truth.

In my opinion, the biggest reason the world is so full of irrational, delusional people isn’t because they lack access to information or the tools necessary to make sense of it all. The problem lies in the popularity of the belief that faith in authority is more valuable than skepticism and evidence. If you believe what you’re told, you’ll end up defending beliefs that serve the people who fed you their doctrine. If you don’t question everyone, you’ll believe anyone, and that will not lead you to truth or sanity.

As finite as our minds are, it’s inevitable that you’ll be led astray by good-sounding arguments that are ultimately false. Even if you don’t catch them coming in, you can still correct them by questioning your assumptions, thinking processes, and conclusions.

This entry was posted on Thursday, February 15th, 2018 at 3:53 pm and tagged with common sense, how to be a genius, how to not be stupid, how to think, intelligence and ignorance, sanity and stupidity, think like genius, thinking skills and posted in How to Think Like a Genius. You can follow any responses to this entry through the RSS 2.0 feed.
« Wise Sloth Video List: The Meaning Of Life
Wise Sloth Video List: Fixing The Economy »

One response to “My Theory On Common Sense”