My Two Rules About Rules 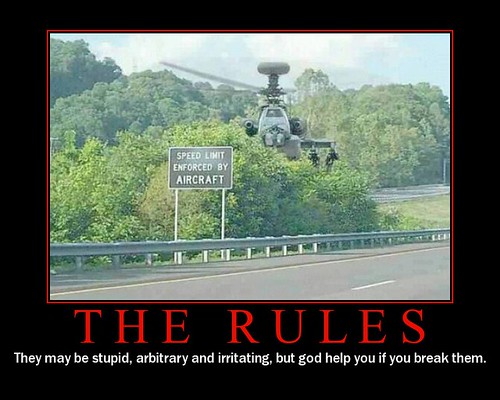 Rule #1: Rules were written by people, and most people are idiots.

If there were one lesson to be learned throughout all of human history, it’s Rule #1. Amazingly though, there are billions of people who haven’t learned that lesson. Oh, sure they’ve learned not to kill 6 million Jews, but they haven’t learned to question their employer’s rules today. As a result, they get locked into enforcing outdated or illogical rules that make people’s lives worse.

The rules they enforce might not kill 6 million Jews, but they’ll waste the short and infinitely valuable time being bogged down with needless work. This will prevent them from accomplishing their highest level goals, ironically, in the name of doing what’s right.

Rule #2: A rule’s only true authority comes from its ability to help people.

Rules were created to serve people. People weren’t created to serve rules. When a rule ceases to help people, it negates its purpose for existence and thus negates its authority. For example, nobody would argue against the rule “don’t kill people.” However, rules have to be judged on a case by case basis according to whether or not they’ll help or hurt people each time they’re enforced. If a situation arises where it will help people more by not enforcing the rule, then it should not be enforced. For example, if you lived next to a Nazi concentration camp, you might decide it’s moral to break the “don’t kill people” rule if it were the only way to save the lives of the victims in the concentration camp.

This entry was posted on Friday, October 30th, 2009 at 11:55 am and tagged with critical thinking, importance of intelligence, logic, maturity, philosophy of learning, rules, self-help, self-improvement, value of wisdom and posted in How to Think Like a Genius. You can follow any responses to this entry through the RSS 2.0 feed.
« How to write a simple story
Suburbia Is A Sensory Deprivation Chamber »