10 Steps to Winning An Argument 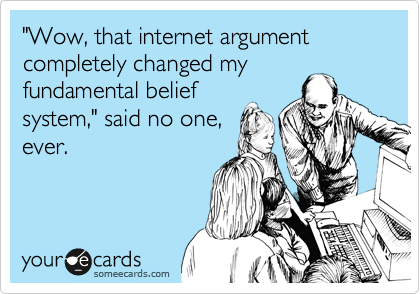 When someone tells you something you disagree with, recognize the fact that you’ve been wrong before. Regardless of how absurd their idea is, remember how confidently you once believed the things you now know you were wrong about. The same thing could very well be happening again.

Assume that if this person believes what they’re saying, then they must have a compelling reason to. You might find in the end that it’s not logical, but since it’s strong enough to influence them, there must be something to it. Find out their reasons for believing what they’re saying before you disagree with them. Press them to keep talking. Find out everything there is to know about the topic before criticizing it.

Don’t respond yet. Tell the person, “Give me a few minutes to think about this.” or better yet, “Let me sleep on it. We’ll continue this conversation tomorrow.”

Assume/pretend the other person is right. Block out your beliefs for a time and look at the world through his eyes. Imagine living a life where you walk around believing what you were just told.

Put your initial hypothesis about the outcome out of your mind. This is a clinical study where scientific truth is more important than winning. In fact, the only way to truly win is to arrive at the truth. Furthermore, disregard the source of the idea you’re studying. Just because the idea came from a source you don’t trust, doesn’t mean it can’t be true. The source has nothing to do with the idea. So separate the two for the time being.

Take the results of your scientific dissection and file them away. Then take your own ideas and put them under the microscope. Even if you’ve studied them before, the fact that they’re being challenged means there’s a chance you might have missed something. Consider where your ideas came from. Did you really adopt them because you’d done all the math and arrived at the conclusion this is the correct answer yourself, or did somebody else tell you it was true? Dissect your arguments with the scalpel of logic again. Be brutal about it. Get angry at your ideas. Hate them. Tear them apart with the fury of a lover who just found out your soul mate has been cheating on you.

Compare the results from both of your studies, understanding that the goal of the study isn’t to determine who is right or wrong. Arguments are almost never black and white. You could both be right about some aspects of the topic and wrong about others. The goal of the study is to take the good and bad of both arguments and mix them together to create the real truth. If at the end of the study you accept or reject the opposing idea completely, you probably did your math wrong. If you do find fault on either side, don’t throw the whole petri dish away. If an idea has flaws, then fix them.

If you want, you can present your findings to the person you argued with, but this isn’t necessary. This whole process was never a battle between people. It was really an internal battle in your personal search for truth. Whether or not you can convince the other person of your findings is irrelevant.

If you do decide to continue the argument with the other person, don’t worry about winning. Simply explain your findings to them, and if they don’t like it, then end the conversation. Winning an argument won’t do anything for you except stroke your ego, which is pointless. Only proceed if the other person is willing to learn.

Watch for personal attacks. Once either side throws a personal attack, the conversation is over. Dialogue has broken down, and neither side is listening objectively anymore. So you may as well quit. If you draw first blood, you’re probably the more closed-minded person. If you had logical reasons for your argument you’d be using them instead of calling the other person names. The more you make fun of the other person, the more of a case you build that you either can’t handle the truth or just like to fight.

This entry was posted on Monday, October 9th, 2017 at 8:47 pm and tagged with arguing, critical thinking, debate skills, logic, maturity, problem solving, self-help, self-improvement, thinking skills, value of wisdom and posted in How to Think Like a Genius. You can follow any responses to this entry through the RSS 2.0 feed.
« The Map Of Everything
How To Become An Expert At Anything »