The more you know, the wiser you can become, but until you use a piece of knowledge in a question, it’s just inert information in a data set waiting to be queried. You have to ask yourself questions and use the knowledge in your brain as the variables in the equations in order for your knowledge to serve a purpose.

The more important the question, the more valuable it, and the knowledge required to answer it, becomes, but tallying the sum total of your knowledge is futile. The only thing that really matters is you came up with the best answer to the best question to have the most positive effect on your life. If you’re doing that, then you’re moving forward in life and shouldn’t have time to rest on your laurels anyway.

You can appear wise if you happen to know the right answer to a lot of random questions, but if the question is unimportant, then the only people who would praise you for mastering futility are fools. That’s not the definition of genius. That’s the definition of insanity.

Wise people appear to be two steps ahead of everyone else because they’ve already asked themselves the most important questions before they came up, and they’re focused and driven because it doesn’t take external motivation to do what’s most important to you. Far from needing a push, you’ll make excuses to justify doing what’s really most important to you. It takes motivation to act against your beliefs. That’s why there are so many backsliding religious people. Religion is hard to do because it requires a lot of cognitive dissonance to believe in something that fails the test of truth.

Since thinkers have already taken it upon themselves to thoroughly question what’s logically most important in life, they’re more likely to be working towards a logical end goal. People who don’t make a habit of asking themselves, “What’s most important in life?” are unlikely to be toiling towards or defending a logical goal. That’s ultimately how you measure the difference between wisdom and foolishness: by the value of the end goal. You can accomplish everything you set out to by being clever as a fox, but if your goals are unimportant, then you’re just the world’s sharpest fool.

So ask yourself, “What’s the most important question I can ask?” Think about that for the rest of your life. While you’re doing it, bear in mind, the only way to answer a question is to ask more questions, and the more skilled you are at asking questions, the better answers you can deduce. So initially, the most important question you can ask yourself is, “How do you ask a question?” Like most questions, there are a lot of answers, and some are more useful than others. If you need a place to start, I wrote a guide which offers one perspective, and there are thousands more on Amazon.

Our brains trip us up with schemas, biases, logical fallacies, and all sorts of other reasons to be irrational. To make enlightenment more difficult, many of life’s questions have multiple right answers. Some questions have answers that can’t be proven but have to be asked anyway. And the most important question you can ask right now may not be the same as anyone else. Plus, no matter how much we learn about life, our understanding will always be at least 99.9% incomplete.

We’re all lost on our own seemingly futile journey customized to our lives, but we’re also all in the same boat. We’re studying the same data set and sharing the stakes. So a lot of our goals/questions will line up. Sometimes corroborating your answers with someone else is proof you’re on the right track. Other times it’s a sign we’re all making the same mistake.

One thing most of us can agree on is, if a lion is charging at you, then the most important question you can ask yourself is, “How do I not get eaten by this lion?” because if you die, then you’re out of the game. So to the extent that life is valuable, it’s important for you to ask yourself, “Am I about to die?” If the answer is “yes,” then the next most important question you can ask is, “How can I prevent that?” If the answer to the first question was “no,” then the next question you need to ask is, “Are other people about to die, and if so, how can I prevent that without getting myself killed in the process?”

You may be a murderous psychopath who views other humans as soulless piles of atoms, or you may be a sociopath who measures the value of others by how you can use them to get what you want. You may be a religious zealot who measures the value of other people by how many of your favorite prophet’s rules they break, or you may be an abused, broken child in an adult’s body, who hates the world for everything it’s done to you. No matter what you think of anyone else, the bigger picture is that we’re all in this together. It takes a collaborative effort to advance humanity. The more people die, the fewer allies we have to accomplish mankind’s long-term goals. We can’t survive, let alone colonize new planets with utopian village theme parks if we don’t work together, but first, we have to save each other.

We all need to survive, and right now the sky is looming with apocalyptic threats so obvious you can’t take your eyes off them. The answer to the question, “Is something coming to kill us?” is “Yes.”

I’ll save you some time decoding the matrix of problems strangling the world. The lynchpin of the world’s problems is poverty. Understand that and everything else will fall into perspective. Fix it, and all its satellite problems will fall away.

But what happens after we fix all the world’s problems and establish utopian settlements on Mars? What’s the next most important question we should ask ourselves then? We’ll see when we get there, but one question we should be prepared to ask is, “What’s the greatest threat to the perfect world?”

It would be logical to prepare ahead of time for an asteroid or futuristic Hitler, but the root of all evil is ignorance. If you build a perfect city and fill it with fools, the first thing they’d do is tear it all down with sincerely good intentions. We’ll never live in anything resembling utopia until everyone is wise. That doesn’t mean we all agree on the same answers, just that we’re all talented, self-driven question-askers who are asking ourselves the most important questions.

Before we become wise enough to live in utopia though, we have become wise enough to create it. Plus, if we all became as genius as possible, we wouldn’t even need to solve half the world’s problems, because we’d be smart enough to not do those stupid things in the first place. This means the most important thing we can do to create and protect utopia is to learn new things and ask new questions today. The better learning resources we have, the faster and further we can improve ourselves.

This means it’s of paramount importance everyone does something to improve education. There are some free online schools, that could use donations, but every nation in the world should be putting money in a single fund to create one online school with the budget of a small country. If your politician isn’t talking about something like that, you should tell them to start or replace them with someone who does.

With or without the perfect education tool, it’s still up to the individual to decide to teach themselves by any means necessary. It’s a moral imperative everyone asks themselves every day, “What’s the most important thing I can teach myself today?” because you won’t grow until you do, and when you don’t grow, the world doesn’t either. The less you grow, the more the world is full of idiots. 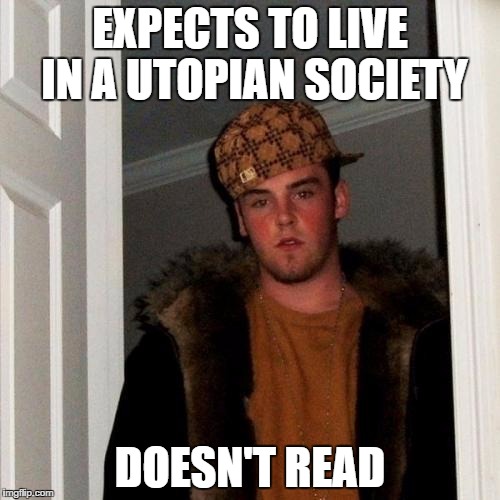 What do you do after solving the big problems?

It’s worth speculating what would you do if you became an uberman and all the world’s problems were solved. What’s the most important question you can ask when there’s no threat to distract you… or when death is unavoidable? You’re here, and you’re going to die eventually. There’s more to life than just surviving and preparing. If you only live for tomorrow, you put off living indefinitely. There’s value in the moment, and there’s value to who you are independent of what you can do for society.

Whoever you become is who you have to live with. Who you are is how you experience reality right now, and for the rest of the fleeting moments in your life regardless of anything going on anywhere outside your skin. There’s no point training to be the perfect problem solver, student, worker, artist, citizen or parent if you’re not becoming the perfect you. I could be wrong, but sooner or later, the most important question you can ask yourself may be, “How do I become more me?” 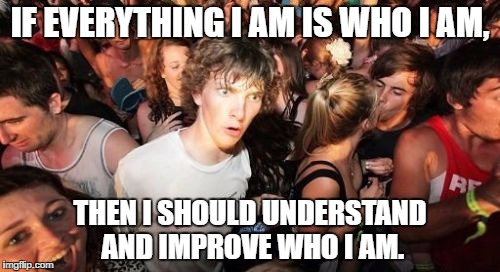 Well, if you can be your favorite you in the present moment, then afterward, you’ll have the perfect past to look back on. Everything I’ve said up to this point may feel more like a guilt trip than an inspirational speech. Nobody can just jump up, become an ubermensch and build an intergalactic empire, but I’m not begging or demanding you to carry a burden. I’m pointing out what an opportunity life is. Every question you ask is a step forward, and the more steps you take, the farther you get. Climbing that mountain yields at least three rewards: the experience of the journey, getting to see above the clouds and being able to say you did it. That’s life, and it doesn’t happen on accident.`

This entry was posted on Tuesday, October 10th, 2017 at 5:18 pm and tagged with critical thinking, importance of intelligence, logic, maturity, philosophy of learning, self-help, self-improvement, value of wisdom and posted in How to Think Like a Genius. You can follow any responses to this entry through the RSS 2.0 feed.
« How To Become An Expert At Anything
The Relationship Between Sanity, Reality, Truth, Science And Religion »