Despite the world spending over $100 billion dollars on humanitarian aid and trillions more on public infrastructure, poverty is only getting worse, because traditional cities separate people from sources of jobs, food, water, utilities, entertainment, and education. The current housing system is designed to make real-estate more expensive, the more conveniently located it is, which means the poorer you are, the more expensive, dangerous, discouraging, unhealthy and opportunity-less your life will be.

If every country pitched in to pool together $50 trillion, they could solve extreme poverty and refugee crises by building a self-sustainable apartment complex/office building in the shape of a ring, 100 miles in diameter, where every resident will have immediate access to food, water, shelter, jobs, and transportation. As long as predatory capitalists don’t take over the city and raise prices and lower wages to extortion levels, every resident would be able to live fear-free for life.

A project of this size would face many hurdles. One of the biggest would be, where to build it? One solution to that problem is to build it on water. This approach would be more expensive, but the benefits might outweigh the cost.

It wouldn’t take much engineering to build a floating city. Instead of building a huge, floating base and then putting a city on top of it, build hollow modules that connect together. Then, a big wave wouldn’t knock any houses or businesses over, because everyone would be living and working “underground.” The surface area could be used to grow food and raise animals.

All you need to make a floating house is a boat hull. You could cast them out of concrete. Engineers have been building hollow concrete boats and caissons for years. 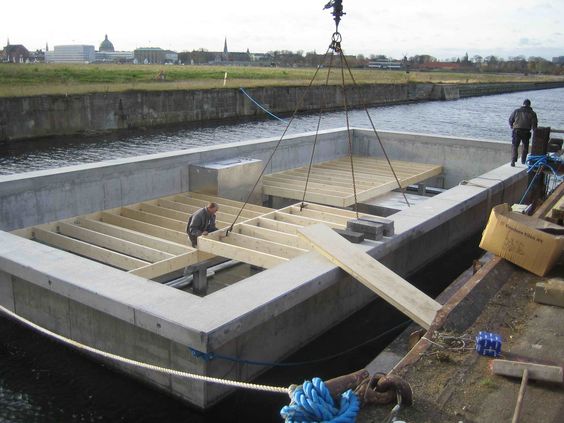 The technology could be easily adapted to mass producing floating houses. Or you could make the hulls out of fiberglass or steel. It might be more expensive, but it would cost less to build a modular fiberglass bobber house than to build a shack in Honolulu or New York City.

Even the sturdiest buoy city would be capsized by a mega wave on the open ocean eventually, but instead of building a monolithic island in international waters, you could connect a line of modular floating homes along the coast of a relatively protected body of water, like the Caspian Sea or the Great Lakes.

If this mega structure were built in the Mediterranean Ocean, you could create a walkable path from Africa to Europe. Refugees wouldn’t use it to invade Europe because they would already have ocean-front property and everything they need to raise a family. You could use that path as a new trade route, and the new most popular tourist destination in the world.

We wouldn’t need to fight over one location for the project. The governments of the world could build one hundred module factories around the world and gradually build a chain around every protected body of water. Life might be so idyllic, the majority of humans will flee the mainland and leave it to Mother Nature.

I believe the environmental benefit of a floating civilization would outweigh the risks. Since all the food, water and utilities would be created in-house, less packaging and transportation would be needed to get the necessities of life from their point of creation to consumption. The modules could be equipped with traps that filter pollution out of the water, and the hulls of the boats would provide new artificial reefs for fish to eat from.

This idea is crazy for being outside the norm, but not because it’s unfeasible. The richest 1,200 people in the world have over $50 trillion sitting in their bank accounts not doing anything. That’s more than enough money to house every refugee and homeless person in the world off-land. Even if governments footed the entire bill themselves, the money they’d save in humanitarian aid and social services would pay for itself quickly. Plus, it would create jobs, lower unemployment, food scarcity and real estate costs.

Sadly, that’s why the governments of the world would never conspire to build this. If governments cared about their people, they wouldn’t have invested their tax dollars on building unsustainable habitats to begin with. The rich need the poor to live in constant fear and danger because that gives them the leverage to exploit the helpless. Our cities are designed to create scarcity because it lowers workers’ and consumers’ bargaining power, which allows businesses to raise prices and lower wages. Extreme poverty and refugee crises exist because the global economy is designed to oppress and exploit the poor.

It’s almost impossible to get rich without gouging your customers and/or employees. So most rich people would be acting contrary to their past behavior if they donated their fortune to building a self-sustainable floating refugee camp, but there are a lot of philanthropists out there with more money than they know what to do with. Hopefully, some of them find the motive to give back to the world they’ve taken so much from.

If compassion and foresight won’t compel the rich to mass-produce floating city modules, greed should. The first person to streamline the process will become the Donald Trump of the seas. After Trump runs America into the ground, building a new nation at sea might be his only hope of redemption. Granted, being the greedy sociopathic narcissist that he is, his city would probably be full of slaves serving masters. However, if he can establish and improve floating island technology, it would be worth it as proof of concept. Then better people can copy his architecture and build the humanitarian communities we’ve been waiting for.

As a compromise, an island-loving billionaire like Mark Zuckerberg, could build a modular island factory, produce a string of islands, and after all the agriculture jobs are filled, train new residents as computer programmers, give them jobs that generate a profit, and keep a portion until the cost of construction is repaid, then give the employee ownership of their module.

This entry was posted on Tuesday, October 24th, 2017 at 2:17 pm and tagged with concrete boat, concrete island, floating island, how to save the world, permaculture, predatory capitalism, sustainable building, sustainable living, systemic economic oppression and posted in Build a Better World, Fixing the Economy. You can follow any responses to this entry through the RSS 2.0 feed.
« Sustainable Monasteries Could Solve Poverty, Pollution, And Refugee Crises
Floyd Mayweather vs. Conor McGregor: A Cautionary Tale »