The most popular Youtube vlogger is Pewdiepie, a Swedish man-child who posts videos about playing video games and acting silly in his computer room. Pewdiepie currently posts about one blog each weak, which means, in the time between each of his posts, at least 1,900 civilians died horrible war-related deaths somewhere in the world, and that’s a very conservative estimate. 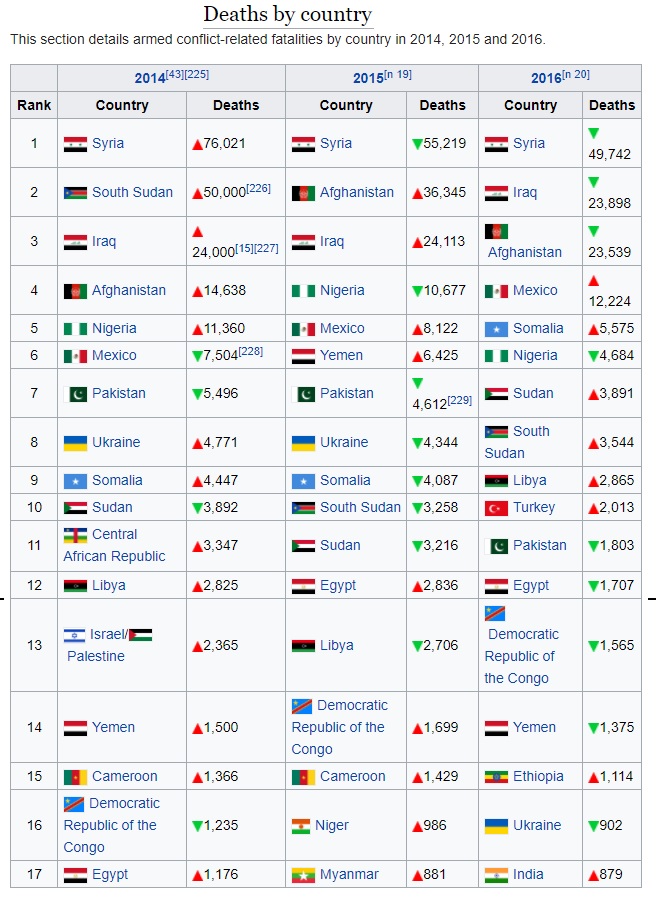 The civilians who survive these conflicts are only technically lucky. Over 22 million people are living in foreign countries right now because they’ve had to flee the apocalyptic death, destruction and destitution in their birth-land. That’s not counting the 65 million people who have fled their homes but haven’t left their country. This means there are about 100 million people who are homeless because they would die if they went home.

That number doesn’t count the 100 million people in the world who are just old-fashioned homeless, or the 1.3 billion people who have homes and jobs but are working themselves to death while starving in a shit-covered tin hut with no water, electricity or sanitation.

In conflict zones, it’s hard to get real numbers how many people are suffering, but we know that over 3 billion people live on under $2.50 per day. These statistics don’t highlight a few isolated travesties. Almost half the population of the world lives in extreme poverty, and there are still several billion more who make more than $2.50 per day and live below the poverty level.

Basically, if you have running water, air conditioning, heat, a bed, pornography and an education, you’re one of the most privileged people in the entire world. Drop to your knees and thank God if the worst problem in your life is that nobody loves you.

If you factor in all the money countries and nongovernment agencies spend on humanitarian aid each year, the cost easily eclipses $100 billion dollars each year. The world could afford to spend more money to fight poverty, but it spends over $2 trillion on the militaries which are displacing people. So taxpayers are spending more money on creating humanitarian crises than solving them.

We already spend trillions of dollars every year on infrastructure that is supposed to help people live functionally, but it hasn’t solved the problem because it addresses the problem in a roundabout way that creates more problems than it solves. All the roads, plumbing, and power lines haven’t saved the poor in Detroit or any other major city in the world.

This makes the problem seem unsolvable, but the solution is really very simple. All people need to be happy and healthy are food, clothing, shelter, water, electricity, jobs, transportation and access to markets. If you built a ring-shaped apartment complex with 100 million condos and offices, then dug a man-made river encircling the entire building and used that to water gardens and orchards, you could give the people living there agriculture jobs and a never-ending supply of food and water.

With those problems solved, some workers could specialize in other jobs, which they could reach by walking across the hallway in their apartment complex. Every business would be connected by one road that would never get congested. The bigger you make the diameter of the circular building, the more external markets it would have access to.

Basically, the complex would operate like a secular monastery the size of a major city. You could also think of it as a permanent, self-sustaining refugee camp. As long as the residents don’t have to pay rent, receive an equitable percentage of the profits their work produces, and aren’t overcharged for the goods and services the monastery sells, then everyone will always have everything they need, and nobody would live in destitution or fear thereof.

How would you pay for such a mega project, and who would build it?  It costs about $120 per square foot to build a traditional house, but if you built the refugee camp/monastery using earthbags, you could bring the construction cost down as low as $10 per square foot. Since all that dirt will need to be dug up anyway, you can use the dirt from digging the reservoir/water channel/moat around the complex.

It would take thousands, if not millions of people to build a structure the length of a small country, but earthbag construction is relatively simple. You could simply have the 100 million refugees do the work and then move into the home they built when they’re done. Then they would have a sense of ownership, pride and shared identity with their fellow coworkers/neighbors.

The richest 1,400 people in the world have $5.4 trillion dollars just sitting in their bank accounts, not doing anything. If each apartment unit in the earthbag megastructure is 500 square feet and costs $10 per square foot, you could build 1 billion, eighty-five million units with $5.4 trillion. This figure doesn’t take all the building costs into account, but to put this in perspective, it costs $1 billion per mile to dig an underground tunnel to reduce traffic congestion. You could build a mile of earthbag apartments with a road, gardens, utilities and an aqueduct for far less than $1 billion per mile, especially if you built it in the middle of Africa, Russia or China where property values are low.

We have the money to end extreme poverty in less than five years. We just need to stop spending it on constructing and repairing inefficient cities full of economic dead zones, and build a mega-home that fills all its residents’ basic needs.

The picture below has the aquifer in the center of the building instead of a moat around it, but it still illustrates my proposal.

This entry was posted on Tuesday, October 24th, 2017 at 2:17 pm and tagged with economic reform, how to save the world, intellectual monastery, permaculture, Poverty, predatory capitalism, refugees, secular monastery, sustainable building, sustainable living, systemic economic oppression and posted in Build a Better World, Fixing the Economy. You can follow any responses to this entry through the RSS 2.0 feed.
« Why And When You Should Have A Problem With Authority
Concrete Modular Floating Islands Could Solve Poverty, Pollution, and Refugee Crises »

One response to “Sustainable Monasteries Could Solve Poverty, Pollution, And Refugee Crises”