The Evolution Of My Definition Of Love

1. a profoundly tender, passionate affection for another person.

2. a feeling of warm personal attachment or deep affection, as for a parent, child, or friend.

4. a person toward whom love is felt; beloved person; sweetheart.

That definition is nearly vague to the point of being useless. It doesn’t tell us how long it takes to fall in love, what you have to do to get there or how to be sure your feelings are more than just an infatuation. Does it only take a few weeks to fall in love? A few months?

When I was seventeen years old I didn’t know what love was, but I believed it had to be forged by stronger, more meaningful experiences than could be had in a few months. I believed this so strongly that I refused to kiss my high school sweetheart until I was sure it meant something very, very serious. I was even more reserved about telling her I loved her. I didn’t want to undermine the value of our kiss or our words by throwing them around loosely. In the end, my high school sweetheart and I broke up, and I never did tell her I loved her. For years afterward, I congratulated myself for make the right choice because, in my mind, the fact that we broke up proved our love wasn’t real.

Yet, during the time we dated she was all I thought about all day. Seeing her took my breath away every time. The sound of her voice was like an angel singing. When I was in her presence I felt like I’d been let into Heaven early and unworthy. Most of my peers would have called that love, and though I wouldn’t have agreed with them at the time, looking back on that relationship I can say that even if our feelings for each other weren’t forged by the test of time, they were still sincere. I’ve often wondered if I could articulate a reason why my feelings for her weren’t love.

I had a hard time answering that question without a usable definition of love, but my next relationship taught me a few things that helped me better define the concept. Several years after graduating high school I moved to Italy where I dated an Italian girl who introduced me a novel way of defining and measuring love.  She pointed out how, in the English language, you can tell a romantic partner that you either like them or you love them. That only gives lovers two ways to define their relationship.

English speakers are free to use the same terms to describe a progression of affection, but the tiers aren’t as institutionalized in the American vernacular/dating customs as they are in Italy. I certainly didn’t see the distinction growing up in America. I wish I would have had the words to tell my high school sweetheart, “Ti voglio tantissimo” at least.

In my early twenties, I found this tiered perspective of love slightly more useful than my original “all or nothing” point of view, but it raised more questions than it answered. In order for this paradigm to be useful to me, I had to define all the stages of a relationship leading up to love in addition to defining what love itself is.

The Italian girl and I eventually broke up, and we both went on to explore new relationships. I studied mine closely to try to pick out their turning points as if I were picking out plot points in a Hollywood sitcom. I could tell there was a definite progression to real-life romances, but the lines between the stages were blurred. I stared at those blurred lines until I accepted the obvious truth: Love doesn’t evolve like a Pokemon. It doesn’t level up into a new and improved creature in a bright flash of light after racking up enough experience points. It grows gradually, but no matter how big or small it is, it still is. On one level there’s no need to label arbitrary points in its growth. Love doesn’t need labels. It can still mature between two people even if they never change their Facebook status or say the magic words. And as I learned the hard way with my high school sweetheart, spending too much time worrying about labeling the stages of your relationship’s growth can hurt it.

Having said that, you can watch the love lives of the couples in your own life and see that relationships do follow fairly predictable patterns, and understanding them will help you get through them. They’re not profound, mystical or based on tiers of obsession. The most successful couples are the ones who have the deepest friendship, not the strongest case of codependency. In a lot of ways, falling in love is simply the process of becoming best friends. So the stages of falling in love are basically the same as the stages of friendship. But long-term romantic relationships are more involved than simply getting to know someone you enjoy being around. Moving in with someone and intertwining your life with theirs effectively makes you business partners. Integrating two people’s lives isn’t easy, but the process follows a logical and predictable series of stages that Disney doesn’t teach children about.

If you’re looking for a time frame for when it’s reasonable to tell your partner that you love them, you can reference the stages of friendship or relationships. But when do you tell other people you love them platonically? Does the evolution of that kind of love follow a different route? How differently should we love others (if at all)/ Should we have a different name for other kinds of love? And does love have to be so confusing?

The Greek language has five different words for five different kinds of love. They’re more nuanced than I’m about to describe them, but for the sake of brevity, we can say that “Mania” is obsessive love. “Eros” is romantic love. “Philos” is platonic, brotherly love.  “Storgy” is the bond between providers and dependents, and “Agape” is unconditional, selfless (and potentially spiritual) love.

Every other language humans have invented contain their own nuanced definitions of love. It might seem like all these competing definitions would make the task of defining love more complicated, but actually, all the extra data helps us simplify the problem by revealing a common denominator. Regardless of how intensely you feel or show your affection towards any person or group, you’re ultimately doing the same thing for the same reason: you’re valuing them.

If I had to define love, I would say love is valuing something. Who, when, where, why, and how much are just details.

Using this definition, we can answer the question, “How do you love someone?” One way is by valuing them in your heart and assigning emotional weight to the thought of them in your mind. If your feelings exist, then there’s love in them, and that’s worth something. At the same time, anything you do that helps another person fulfill their potential is functionally equivalent to an act of love regardless of your intentions. If you tell someone you value them and then turn around and mistreat them, the love you feel may be sincere in your heart, but functionally your love will be hollow at best and destructive at worst.

We all live according to our unique understanding of the value of life. So we measure and express value slightly differently. This means everyone lives according to slightly different definitions of love. This makes it hard to know when you can believe the words, “I love you?” It also makes it hard to prove to someone else that even though you’re not meeting their criteria of love, the love coming from you is still genuine.

If you can honestly say that you value the other person enough to commit to making them the happiest and helping them fulfill their full potential unconditionally for the foreseeable future then you fully love that person. Even if you can’t commit unconditionally, every bit of commitment you can give is still love by degrees. If your commitment ever waivers or ends, that has no relevance on the value of past love; since it was genuine when it was given it stands on its own. 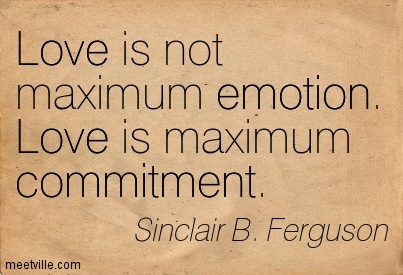 This entry was posted on Wednesday, October 4th, 2017 at 1:08 am and tagged with autobiographical, how to love, life story, love definition, Relationship Advice, what is love and posted in Relationship Advice. You can follow any responses to this entry through the RSS 2.0 feed.
« Stages Of A Romantic Relationship
The Futility Of Being Fake »