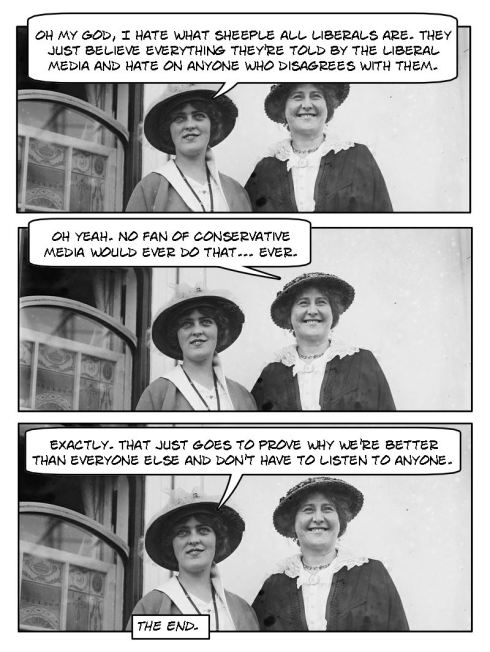 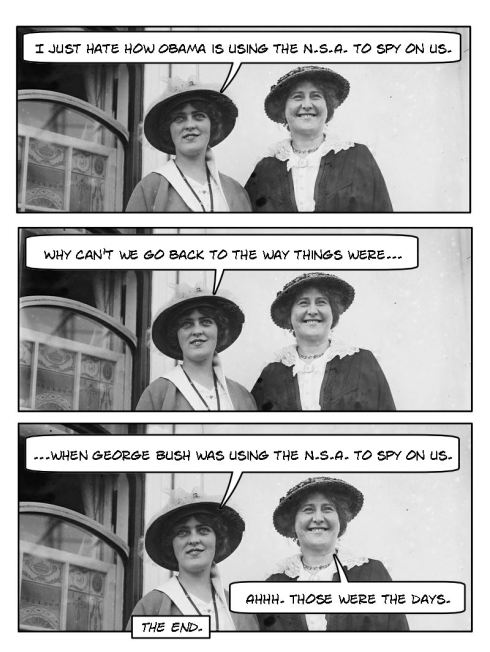 Read the rest of the Two Conservative Ladies comics:

Lady #1: Oh my God. I hate what sheeple all liberals are. They just believe everything they’re told by the liberal media and hate on anyone who disagrees with them.

Lady #2: Oh yeah. No fan on conservative media would ever do that… ever.

Lady #1: Exactly. That just goes to prove why we’re better than everyone else and don’t have to listen to anyone.

Lady #1: I hate how liberals are trying to make government bigger and interfere with our lives.

Lady #2: Oh, Lordy! Does that mean it’s morally wrong for us to use government to push our psuedo Christian beliefs on everyone else like we’ve been doing all these years?

Lady #1: No, dear. Because we’re the only people who’s beliefs matter in the entire world.

Lady #1: I take it as a badge of honor that so many people on the internet disagree with me.

Lady #2: Have you ever considered that the reason so many people disagree with you is because you might in some way be wrong?

Lady #2 Well, I suppose not listening to other people is a hallmark of intelligence.

Lady #1: I believe in smaller government.

Lady #2: So you don’t believe the government should be allowed to say who can marry?

Lady #1: Obviously the government should have total control over that. I also believe in personal responsibility.

Lady #2 So you don’t believe in tax breaks for the rich or subsidies for big companies?

Lady #1 Hells yeah I believe in those things. I also believe in a strong military and police force… as long as they don’t try to take my guns.

Lady #2 So… you believe democracy means getting whatever you want and denying everyone else what they want.

Lady #1: Unregulated capitalism is the only way the masses will ever have a chance at prosperity and happiness.

Lady #2: Yeah, but economic inequality is at an all time high in American society, and the resulting poverty is the greatest source of misery and hopelessness in the lives of the poor.

Lady #1: Bitch, don’t make me shout my premise louder until I drown out everything you have to say.

Lady #1: If there’s one thing America stands for it’s freedom, and we shall fight against tyranny across the globe with our glorious military strength!

Lady #2: Did you know that with the help of the British, America stole the island of Diego Garcia from its inhabitants to build a U.S. military base on?

Lady #1: AAAAAAAAAAGGHH! Why don’t you support the troops, you Taliban-loving fuck wit!?

Lady #1 What a freedom hating whore you are?

Lady #1: There’s only one thing I hate worse than libtards, fags, niggers, atheists, Jews, Muslims, immigrants or protesters who aren’t members of the Tea Party?

Lady #1: People who aren’t tolerant of my views.

Lady #2 How do you endure the pain of your oppression?

Lady #1:  God, I hope New Gingrich runs for president again. He was such an inspiration.

Lady #2: That guy!? He was literally found guilty of corruption. He cheated on his third wife, who had cancer. And he ran for president on the platform that he was going to build a moon base. By what criteria was he a good person much less an inspiration?

Lady #1: By the only criteria that matters… He called himself a Republican and not a Democrat.

Lady #1: Do everything I say without exception or I swear to God I’ll shut down the fucking government! I don’t care how many people it hurts.

Lady #1 AAAAAAAAAGH! You’re completely unwilling to compromise. It’s 100% your fault I shut down the government.

Lady #2 You keep using the word “compromise,” but I don’t think you know what it means.

Lady #1: If we raise minimum wage then business owners like me will just raise prices, and nothing will change.

Lady #1: No, because when we have more money than we need we just horde it. Then it doesn’t go into circulation.

Lady #2 But doesn’t it stimulate the economy when more money is in circulation?

Lady #1 The only point of stimulating the economy is for me to make more money, and I keep it all as it is. That can’t happen if poor people can achieve financial independence and thus not be desperate enough to work themselves to death for pennies.

Lady #1: America’s heroic military is committed to defending freedom and destroying tyranny wherever it rears its ugly head!

Lady #2: Oh, goody. So when do you think America will stop funding Israel’s extermination of the Palestinians and strong arming the rest of the world from stepping in and stopping the genocide?

Lady #1 I’m sorry. I wasn’t paying attention to what you were saying. I was thinking about this hilarious thing that happened on Duck Dynasty last night. Let’s talk about that.

Lady #2: Oh, I’ve just been feeling a bit guilty lately for hating immigrants so much.

Lady #1: Hey, no. Why would you ever feel bad about that?

Lady #2 Oh, I just feel a bit hypocritical since our ancestors were immigrants who came to this country and stole all the land and resources from the natives.

Lady #1 That’s completely different. Our ancestors conquered the natives in bloody warfare. See? They didn’t steal anything. They won it.

Lady #2 That’s why I love you, dear. You find the most creative ways to justify anything.

Lady #2: It’s just that I heard that this guy, Edward Snowden, leaked a bunch of classified information about how the N.S.A. is spying on everyone. I mean, we’re talking dystopian level invasion of privacy here.

Lady #2 Well, I know Fox News told me to label him a hacker and a traitor instead of a whistle blower, but…. I don’t want to be spied on. And how can I love and respect my country when it doesn’t even respect my privacy?

Lady #1 Honey, you’re focusing on all the wrong things. All you need to take a way from all this is… Fuck Obama.