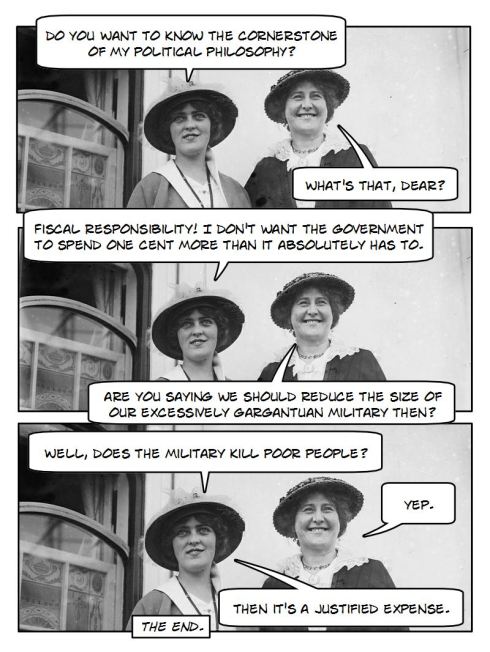 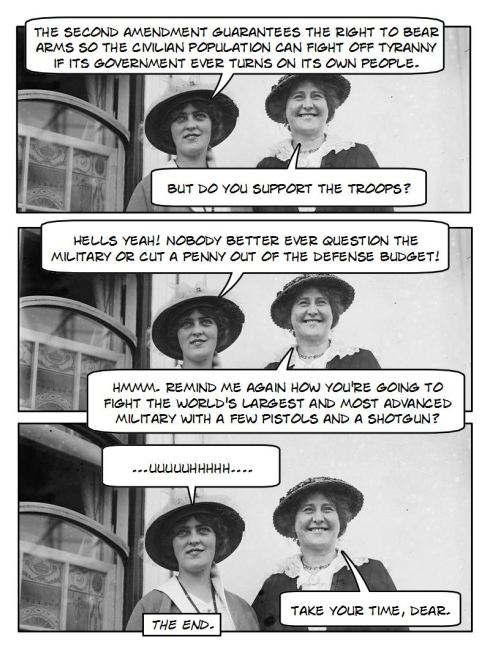 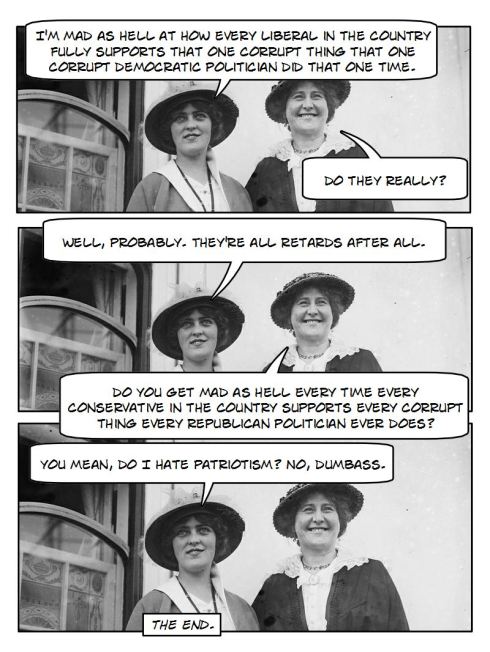 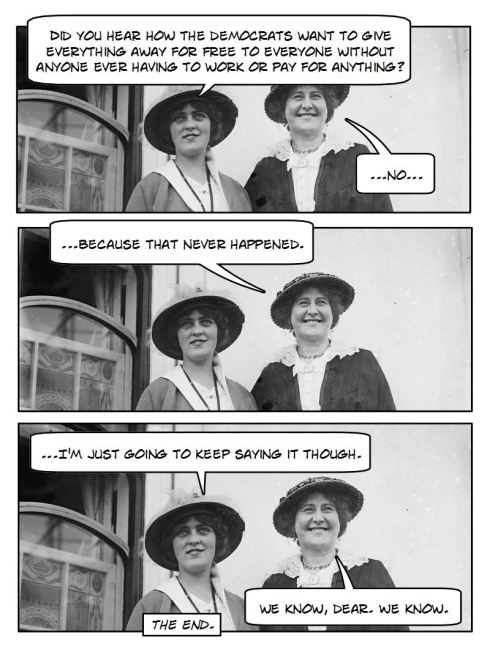 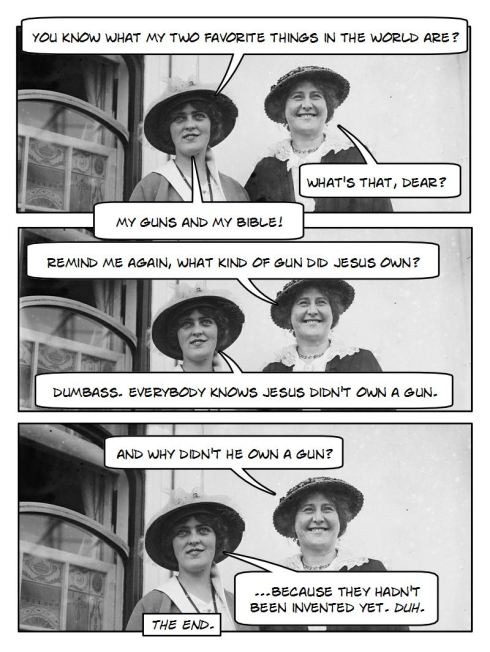 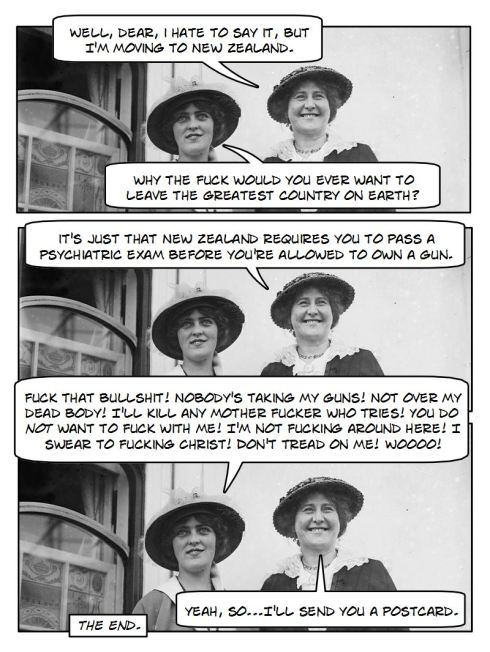 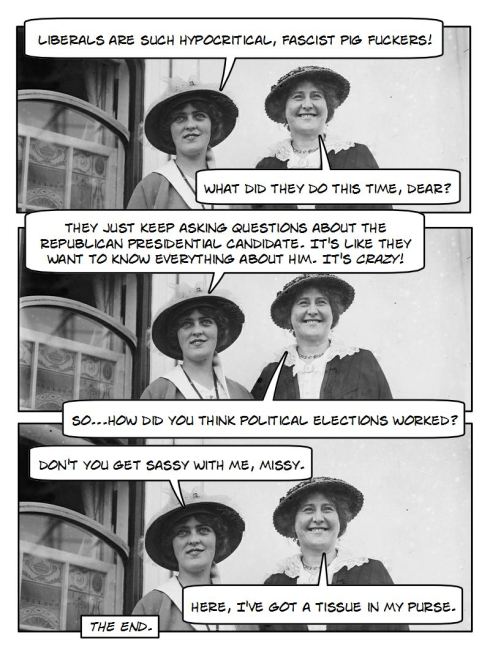 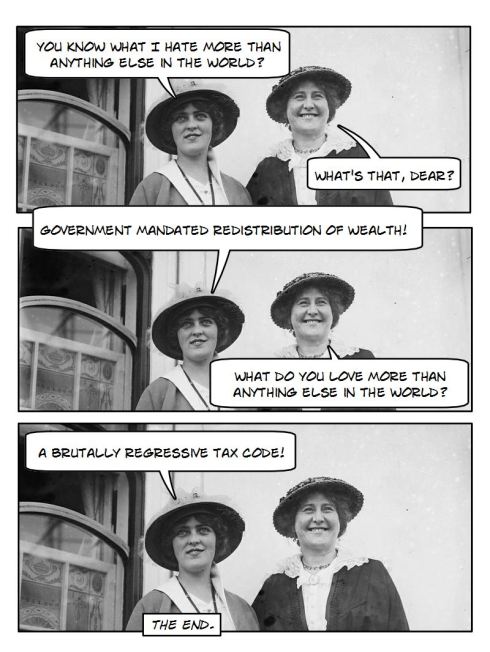 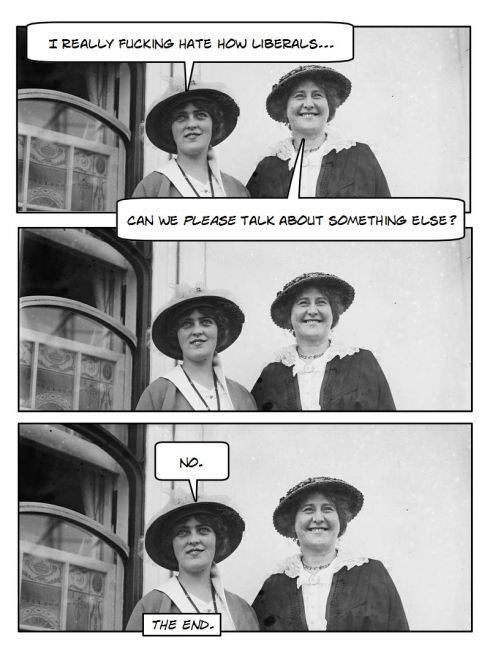 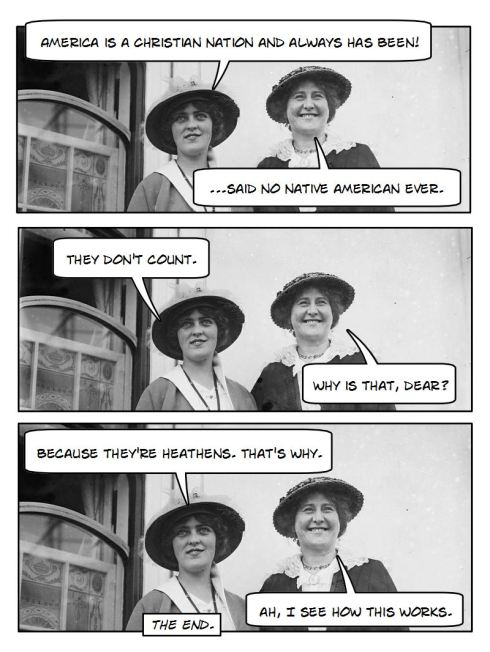 Read the rest of the Two Conservative Ladies comics:

Woman #1:  Do you want to know the cornerstone of my political philosophy?

Woman#1: Fiscal responsibility! I don’t want the government to spend one cent more than it absolutely has to.

Woman #2:  Are you saying we should reduce the size of our excessively gargantuan military then?

Woman #1: Then it’s a justified expense.

Woman #1: The Second Amendment guarantees the right to bear arms so the civilian population can fight off tyranny if its government ever turns on its own people.

Woman #2: But do you support the troops?

Woman#1: Hells Yeah! Nobody better ever question the military or cut a penny out of the defense budget!

Woman #2:  Hmmm. Remind me again how you’re going to fight the world’s largest and most advanced military with a few pistols and a shotgun?

Woman#1: Well, probably. They’re all retards after all.

Woman #2:  Do you get mad as hell every time every conservative in the country supports every corrupt thing every Republican politician ever does?

Woman #1: Do you mean, do I hate patriotism? No, dumbass.

Woman #1: Did you hear how the Democrats want to give everything away for free to everyone without anyone ever having to work or pay for anything?

Woman#1: …I’m just going to keep saying it though.

Woman #1: You know what my two favorite things in the world are?

Woman#1: My guns and my Bible!

Woman #1: Dumbass. Everybody knows Jesus didn’t own a gun.

Woman #1: …because they hadn’t been invented yet. Duh.

Woman #2: Why the fuck would you ever want to leave the greatest country on earth?

Woman#1: It’s just that New Zealand requires you to pass a psychiatric exam before you’re allowed to own a gun.

Woman #2:  Fuck that bullshit! Nobody’s taking my guns! Not over my dead body! I’ll kill any mother fucker who tries! You do not want to fuck with me! I’m not fucking around here! I swear to fucking Christ! Don’t tread on me! Wooooo!

Woman#1: They just keep asking questions about the Republican presidential candidate. It’s like they want to know everything about him. It’s crazy!

Woman #2:  How did you think political elections worked?

Woman #1: You know what I hate more than anything else in the world?

Woman #2:  What do you love more than anything else in the world?

Woman #2: Can we please talk about something else?

Woman #1: America is a Christian nation and always has been!

Woman #2: …said no Native American ever.

Woman #1: Because they’re heathens. That’s why.