14 Reasons It’s Insane to Say All Men Are Evil

Somehow, over the past 15 years, radical feminism became mainstream feminism. Now, gender studies professors in every state are teaching girls they live in a patriarchy designed by men to oppress women. All women are victims, and all men are evil. Masculinity is toxic, and sex is rape. Every week I see new tweets, blog posts, articles, and Youtube videos of women seething with fear and disgust at the entire male population. 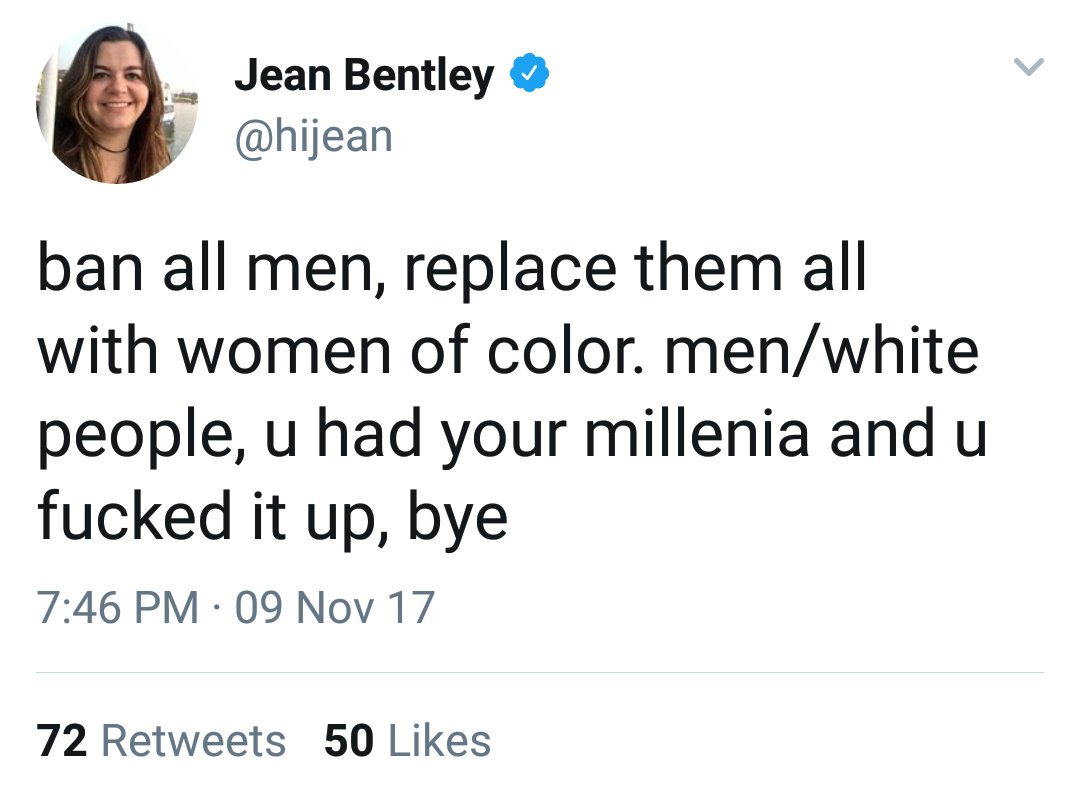 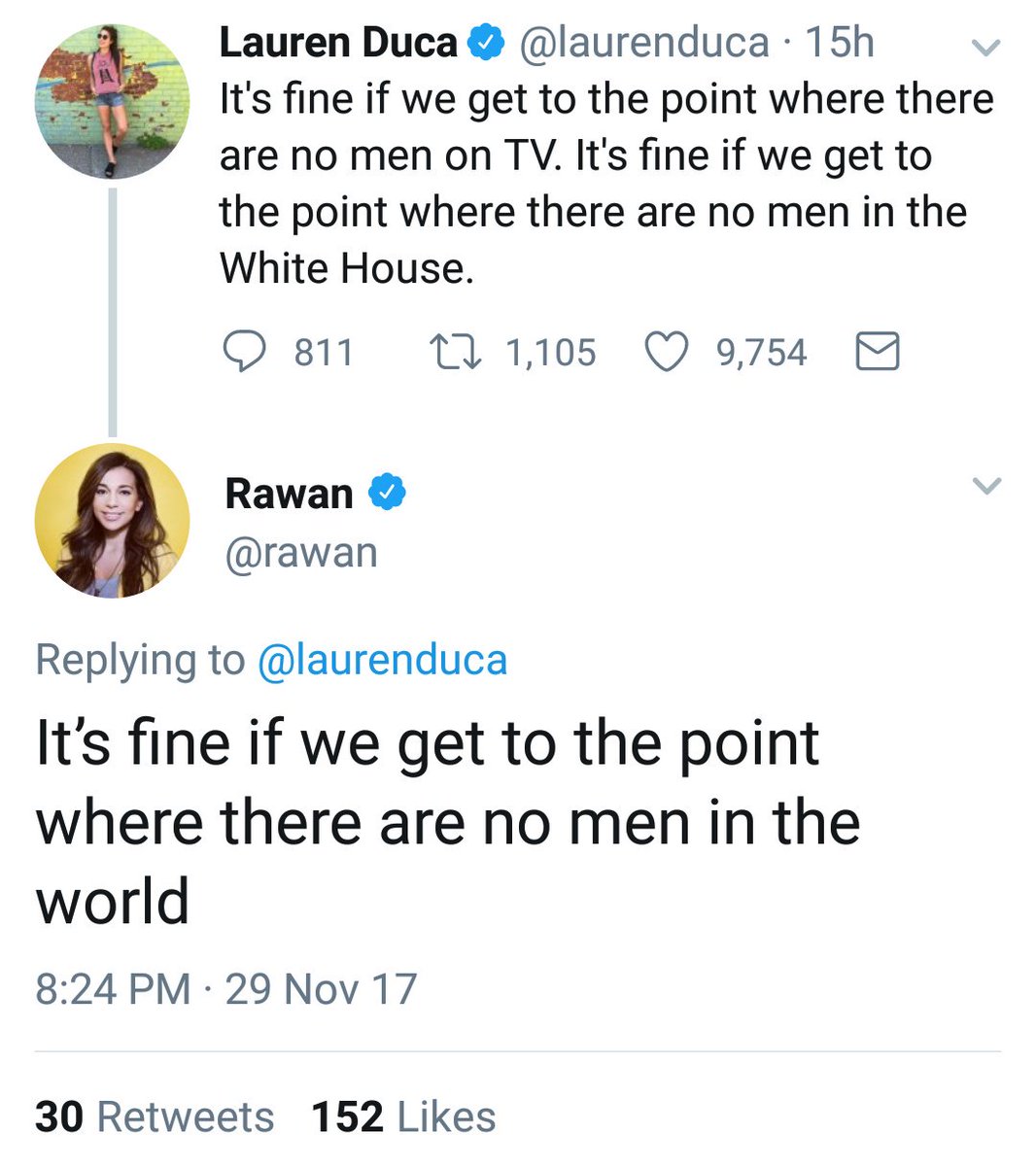 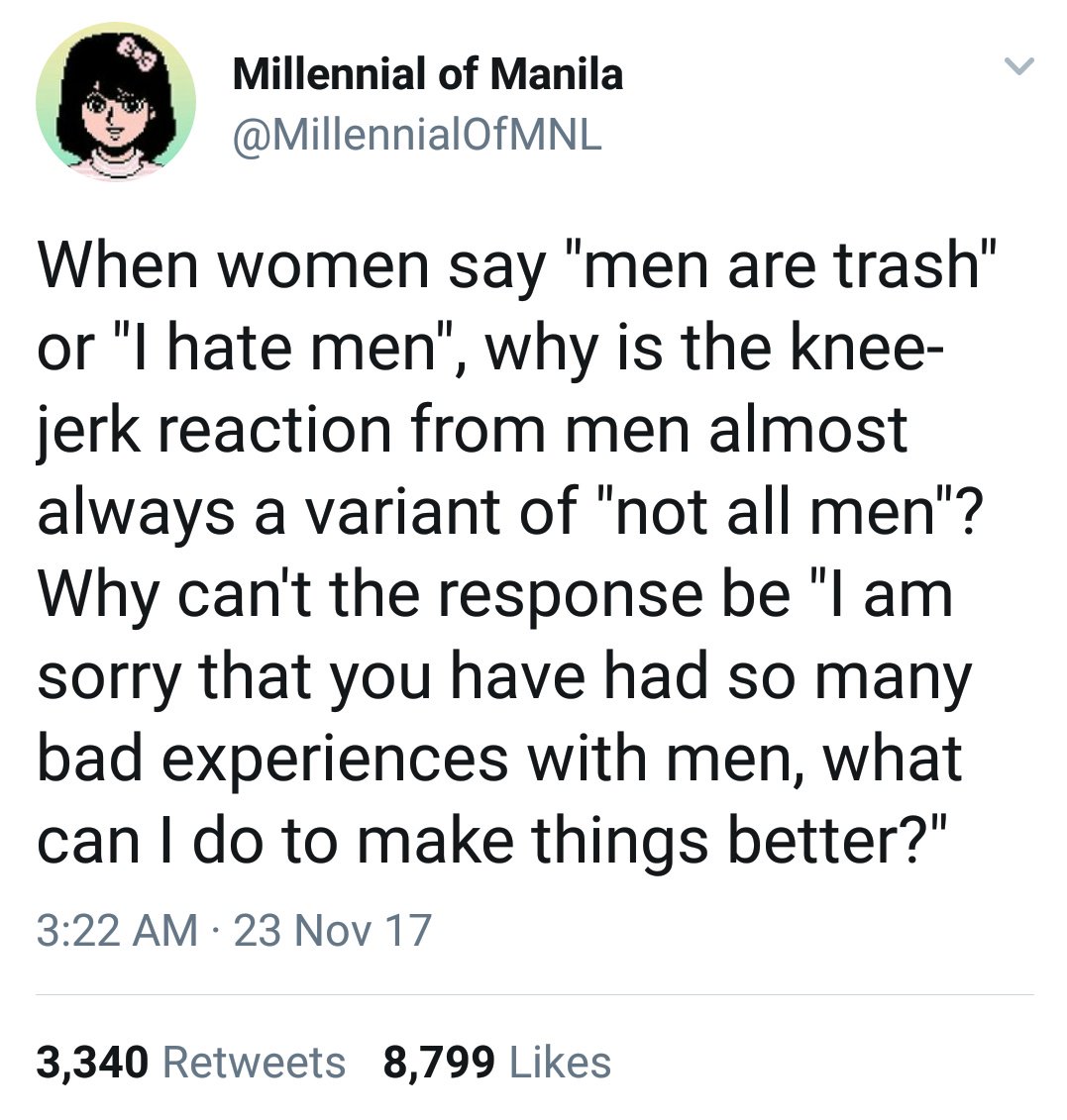 I feel ridiculous stating the obvious, but since feminists are doing such a successful job of making it trendy to hate men, I feel obligated to stand up for us. If you hate men, you’re ignoring at least 13 obvious facts about life:

1: You can’t demonize half the world’s population.

Negatively stereotyping every member of any group for the actions of its outliers is the definition of bigotry. The bigger the group, the more illogical it is to generalize the whole. Misandrists lump half the world’s population into one negative caricature! It’s so obviously insane, I don’t know how to elaborate on it.

I can think of more than ten males who have physically, emotionally, or professionally bullied me. You probably can too, but we can also list women who have hurt us and men who have loved and helped us. Every day, you walk past dozens of men on the street, work next to men, give orders to male customer service workers, and listen to male reporters, politicians, celebrities, and educators. You interact with men every day without flinching because you know they’re not a threat. Chances are, there’s at least one man you call on holidays to say, “I love you.” If you can find exceptions to the statement, “All men are evil,” then you shouldn’t say it.

3: You know women who will vouch for the men in their lives.

Most women are looking for a man to fall in love with, and most will find one. If you think all men are evil, then either you, or most women, have a factually incorrect perception of reality. If most of the women in the world disagree with you, then you should question your objectivity. Chances are, the problem isn’t that everyone else is closed-minded; you are.

4: At least half of all men are beta.

If you think all men are monsters involved in a global conspiracy to oppress women, you must have never been to a Star Wars convention, comic convention, LARPing event, chess club, choir club, Weird Al Yankovic concert, or dating website. Most men younger than thirty, have a panic attack just thinking about talking to women. Those men get friend-zoned, exploited, pushed around, and discarded by women who know beta males will put up with it just for the privilege of being near a woman. You’re ignoring evidence that contradicts your conclusion if you believe there aren’t at least 1 billion gold diggers around the world, manipulating beta males and spending their money. Every year, millions of incel, forever-alone, beta men kill themselves after losing all hope of ever being able to control their fate, find love, or succeed in a career.

If this is who you believe is oppressing you, you’re projecting.

5: At least half of all men are wage slaves earning less than the cost of living.

If you listen to feminist propaganda about how ruthlessly men have designed and gamed the system to give them every advantage in life over women, you’d think all men live in an easy wonderland, where they sleep on beds of gold and lay around all day while women in chains feed them grapes. In the real world, grapes, and every other fruit and vegetable you buy at the grocery store, are picked mostly by male wage slaves who work long hours for less than a living wage. They get minimal breaks, no employee benefits, and their bodies are in constant pain. This is just the agriculture industry. In every sector of the economy, men do the most physically painful jobs that make life easier for everyone else.

That face you make when you work at a job you hate all day, every day, don’t get benefits, and earn less than a living wage. Then hordes of feminists accuse you of oppressing 4 billion people.

6: There’s a line of men who would eat a mile of your shit for the privilege of licking your ass hole.

I served in the U.S. Air Force for seven years. I heard women complain how they have to work twice as hard to make it in a man’s military, but on a daily basis, I saw men lining up to do women’s work for them, help them after work, and hold them less accountable for bad behavior. I knew a woman who would put ice on her nipples every morning to make them pop through her shirt to ensure men would desire and serve her. Any woman, regardless of body type, can find men who want to worship and serve them. Even feminists who hate men still have fanboys orbiting them and telling them everything they want to hear. Everywhere you look, there’s evidence men worship women. The only way to not see it is to lock yourself in a confined space where only angry women are allowed to enter.

7: Women have some systemic privileges over men.

Physical fitness requirements for women in the military are lower than for men. Women aren’t required to register for the draft. Women have more options for domestic violence support, student loans, small business loans, fellowships, and jobs at companies with affirmative action policies. You have to ignore billions of dollars of government spending to hold onto the belief that the system has abandoned women and given men every advantage in life.

Even if women get paid less than men for the same work, women still spend more money than men. If women were as oppressed as feminists say they are, then 4/5th of the stores in malls would sell power tools, work boots, and flannel shirts. In reality, 2/3rds of the stores in malls sell women’s clothing made in Asian sweatshops by male and female slaves.

In every first world country, women spend more money than men. Every marketer knows women are the engine of the global economy. If women make so much less than men, the only way it’s mathematically possible for them to buy as much as they do, is by spending their man’s money. It’s ungrateful and abusive to accuse men of being complicit in a global conspiracy to rob women, while most women spend men’s money daily.

Despite the unendurable stress of being oppressed, women live longer. So regardless of the wage gap, married men spend most of the lives sharing ownership of all their assets with their wives, and in the end, women get it all. That’s not oppression. That’s winning. If the system is designed to set anyone up to fail, it’s men.

10: Men work at spas, where most customers are women.

There are hundreds of thousands of day spas, massage clinics, pedicure clinics, manicure clinics, waxing clinics, esthetician clinics, and other business dedicated to pampering women. Most of the people who work in these leisure industries are women, but there are men who spend every day massaging, manicuring, pedicuring, grooming, and pampering women of all colors, who are often spending their man’s money. If you don’t understand why people don’t take radical feminist seriously, try protesting against male oppression in the lobby of a luxury day spa and see how foolish you feel afterward.

11: Men built and maintain the infrastructure that keeps you from living in a cave.

Radical feminism teaches a revisionist version of history in the world was built on the backs of women. It doesn’t include how many men died building railroads, bridges, skyscrapers, sewers, dams, or roads. It doesn’t mention the countless hours men labored in fields, factories, mines, boats, and forests. It doesn’t honor the firemen, trashmen, cooks, movers, industrial cleaners, or mechanics who have worked until their hands bled and kept working. Maybe if women did more of the backbreaking work men take for granted, they would realize how green the grass is on their side of the fence. 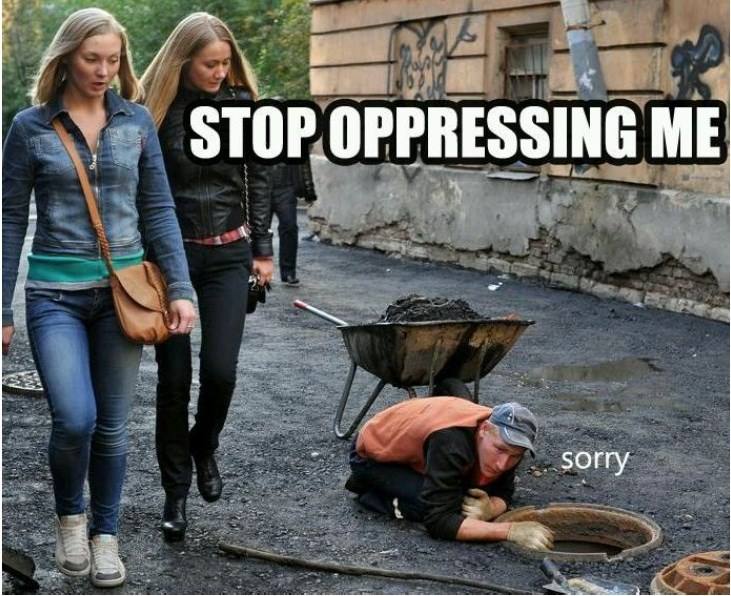 12: Never forget your soldiers and what they sacrificed for you.

Nobody in a foxhole ever said men have it easier than women. You don’t need to go to war to understand that. If you can watch any war movie, and still look a veteran in the eye and tell them they never had to sacrifice anything, and the world would be better off without them, then the problem is you’re pathologically self-centered.

13: Everyone is good and evil.

Everyone loves and hates someone. Everyone has helped and hurt someone. Everyone wants to do what’s right, but nobody knows how to be perfect. We all make mistakes, because everyone is born, lives, and dies ignorant. No individual is completely good or evil, let alone any group. If you only acknowledge the worst things done by the worst people in any group, you could justify being bigoted against anyone, but that’s insane. 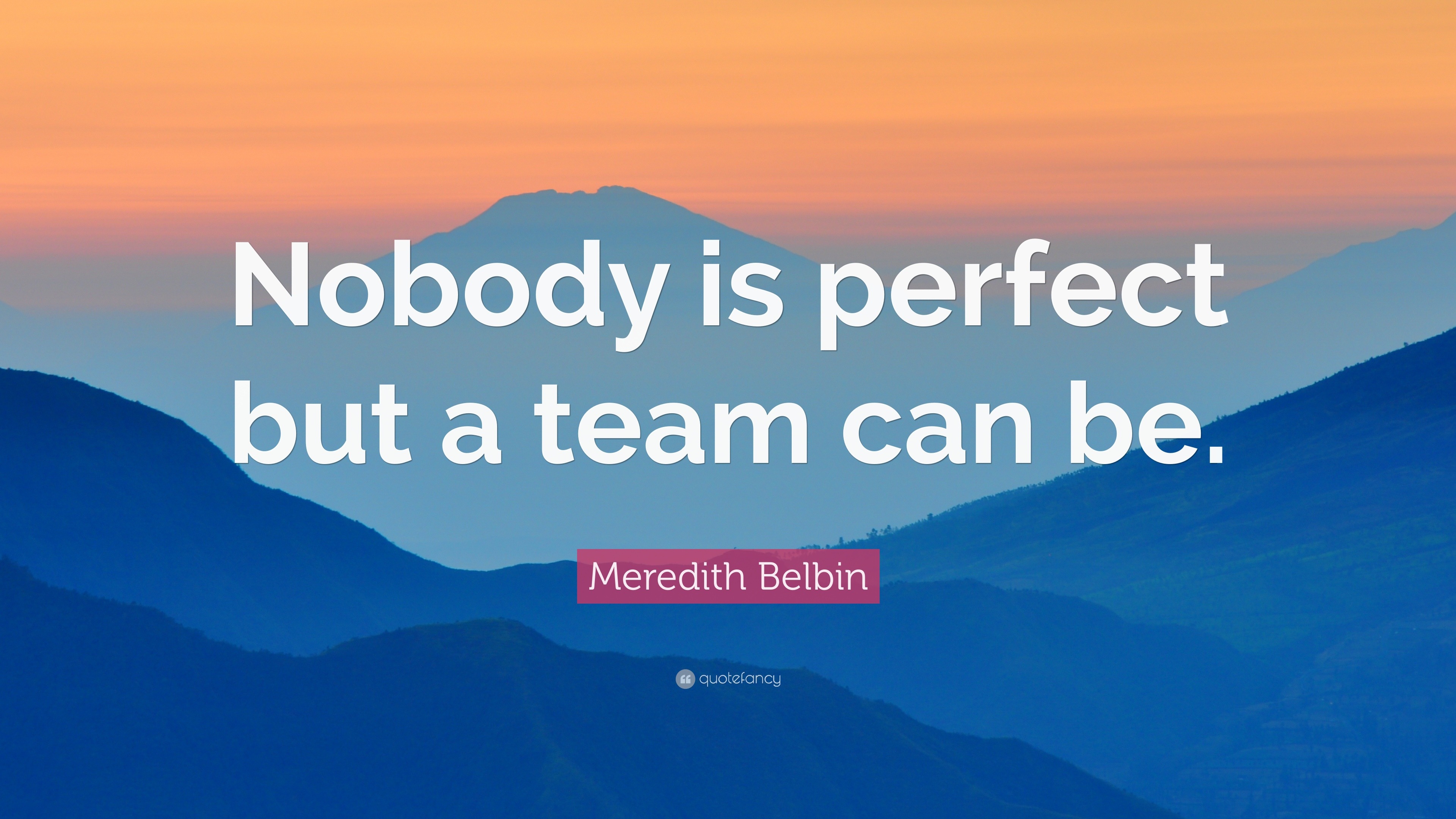 14: The root of the world’s problems is predatory capitalism.

You’re not being oppressed by the white boy who takes your order at McDonald’s. He’s being oppressed by his employer, who is also oppressing you by selling gullible customers addictive, overpriced poison burgers. Aborting all the white babies in the world won’t change the normalcy of predatory business practices, and neither will lynching the rich. The only thing that will accomplish the goals of feminism is economic reform. As long as feminists continue directing conversations and energy towards hating men, business owners of every race will continue to exploit everyone unopposed.

This entry was posted on Monday, November 27th, 2017 at 3:07 pm and tagged with critique of feminism, defense of men, feminism, flaws in feminist philosophy, gender equality, man hating, mysandry, problem with feminism, what feminism gets wrong and posted in Racism and Xenophobia, Social Justice Warriors. You can follow any responses to this entry through the RSS 2.0 feed.
« How Can I Improve The Wise Sloth?
Ways To Improve The U.S. Military: Part 1 »