You must be very proud of your company. You started it on your own and took it from a garage-sized operation to an award-winning and internationally known brand. Few people in the world ever achieve that much success. Equally impressive is the fact that success doesn’t seem to have gone to your head. The few times anyone has asked me what you’re like I told them you’re a down-to-earth kind of guy, a little shy even. I told them you’re always smiling and friendly and that I can’t even imagine what you’d be like when you’re angry because that would just be so out of character for you. It’s unusual for someone as gentle as you to make it so far in the dog-eat-dog, cut-throat world of business. You should be proud.

I sometimes wonder if you ever imagined your company would grow this large when you first started out. If so, I wonder how you envisioned your company would look. I wonder if you imagined it being a progressive, Utopian(ish) workplace like Google where your employees would almost rather be at work than at home. You certainly seem to be trying to take it in that direction, what with the idealistic company values printed on the giant poster in the front office, the lack of dress code, the free milk and coffee and fruit and the occasional company-sponsored fun-night. Some workers even get a dollar an hour bonus for meeting their “key performance indicators.” I know some of the executives get bonuses for reaching their targets, and their bonuses are so big that nobody ever talks about them. You’ve also set a sales goal, that if we meet, the company will divide up one million dollars between all the employees. We both know you’ve been far more generous with perks than most companies.

I wonder if this is how you envisioned the future of your company when you first started out. I also wonder if sometimes you look down from your corner office and think, “You guys are all suckers. I can’t believe you’re doing this. Thank God I’m not as naive as you.” Let’s be honest for a minute and spell out the math, so to speak. I know this must have crossed your mind before.

In addition to paying your workers as little as possible to maximize the profits you get to take home you work us as long as the law will allow. You also exploit the loophole that as long as overtime isn’t mandatory you don’t have to pay over time, and despite the fact that we do intense mental and physical work for you, we’re expected to keep up the highest pace humanly possible the entire time, every day. And you guarantee that we’ll exhaust ourselves to that limit by designing the computers we use to monitor, record and report everything we do. So even if our boss doesn’t see us resting the system will show it. If there’s any doubt that we’re pushing ourselves to the limit (which there’s not) you can always play back the video footage from the dozen cameras that keep a constant watchful eye on us.

Granted, all the stress would be worth it to us if we meet that sales target and get that one million dollars… except everyone in the company knows it would take fifty miracles to make that happen. That bar was set low enough to (theoretically) motivate us but high enough that there was never any risk of you having to pay up. So all that “incentive” has accomplished is sending a clear message to everyone who works for you that we’ve made you enough money that you can afford to give away a million dollars but you’re not willing to share that wealth with us. In fact, you’re willing to insult our intelligence and lie to us to try to squeeze as much sweat and irreplaceable time out of our fleeting lives as you can so you can convert it into cash in your pocket to squander on more luxuries for you and your family.

This is why your best workers leave. This is why you have so many immigrants and potheads working for you, because they’re the only ones desperate enough to endure the working conditions you’ve created.

I often wonder if this is how you imagined you’d build your fortune when you started your company. I wonder if you dreamed of wasting the best years of people’s lives slaving away for you for barely enough money to survive. I wonder if you even realize you’re doing it and if you’ve excused it all away by telling yourself things like, “That’s business.” or “If you don’t like it you can get another job.” or “I have to do this to stay competitive.”

Why is it that if you cut a person’s life short it’s called murder but when you cut the best years of their life out in the middle it’s a justified business expense? You might think these questions are overdramatic, but if you play back the video of your workers and you see the dead-eyed, stressed out expressions they wear on their faces all day when your back is turned you’ll realize I’m not exaggerating when I say that the reality is, you’re killing us little by little every day.

I’m positive this isn’t what you envisioned when you started your business, and I’m positive that you’re either completely ignorant of what you’ve become or you’ve made enough short-sighted excuses to justify your actions to yourself, and I’m positive you’ll never realize the true cost your success has come at to the people who run your company. I regret that I’ll never be able to send this letter to you because you’ll fire me, and I need this job because slavery is better than starvation. So I’ll work for you as long as I have to until I’ve saved enough of the crumbs you’ve let fall from your plate and I can start my own business that treats the people I work with as equal human beings fully deserving of equal respect and profits. I, and everyone who has ever worked for you, will always remember you with sadness and regret.

The Legacy Of A Billionaire 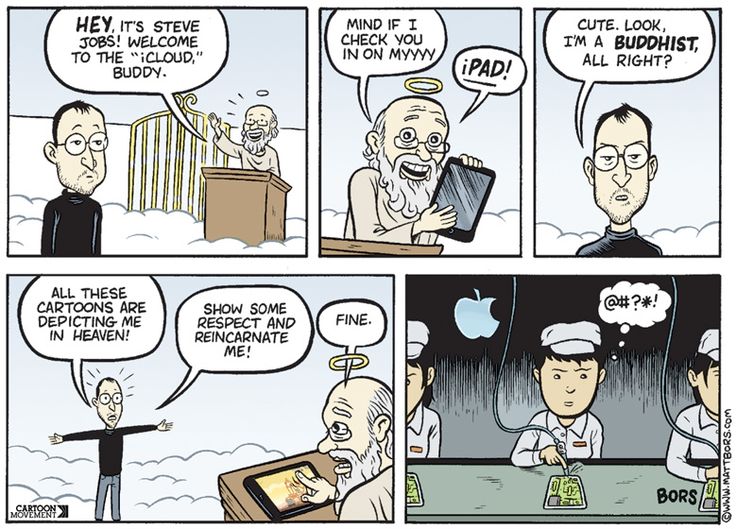 Steve Jobs, founder and CEO of Apple, died recently, and the internet has been flooded with eulogies and praises about him. If he had been a member of the Catholic Church, I swear they would have awarded him posthumous sainthood, and I’m not surprised by this at all. When Bill Gates, Richard Branson and Warren Buffet die they’ll get the same treatment. Even Rupert Murdoch and the Koch brothers will get some kind of glowing recommendation letter to Heaven from someone.

I’m not saying all this praise is completely undeserved. Every billionaire puts a lot of mental and physical effort into building companies that provide useful products to humanity. I respect that, but I also recognize it’s only half the truth. It’s misleading and unethical to only acknowledge the high points of any billionaire’s career, and the fact that we praise billionaires so eagerly and consistently, is a sign of a deeper flaw in society which desperately needs to be addressed and rectified.

So the only way to become a billionaire is to steal. The way you do that may be legal, but it’s still stealing. Steve Jobs may have been a technological visionary, but the cold, hard fact of the matter is he was a thief. I can respect the work he did, but I can’t respect him for the unreasonable, unnecessary mountains of cash he skimmed off the sweatshop slaves who built and sold Apple products.

Why did Steve Jobs deserve eight billion dollars, no limit on his lunch breaks and thousands of heartfelt eulogies, while the people who build iPods apparently don’t even deserve to be treated like human beings? You could ask the same question about any billionaire, but almost nobody ever does. So we keep rewarding robber barons while punishing hard working poor people.

As it stands, the generally accepted answer to this question is that there is no limit; the more money you horde, the bigger of a hero you are. Furthermore, the blame doesn’t lay on the CEO for overcharging for products. The blame lies with the customer for agreeing to pay the advertised price. There is some truth to that, but again, it’s only half the truth.

Steve Jobs knew there was no logical reason for his customers to pay the price he wanted to charge for iPods. So he created one of the most successful advertising campaigns in history to frame the iPod as a status symbol first, and an electronic gadget second. In other words, Steve Jobs went down in history as a visionary business leader for orchestrating a propaganda campaign that exploited his customers’ mental weakness to swindle them out of more money. That’s not admirable. That’s dishonest and cruel, but he gets praise for it from so many people because the entire economy operates under the assumption that if you can be swindled, then you should be.

This isn’t how a utopia operates. This philosophy creates poverty, which in turn creates misery and crime. This is part of Steve Job’s legacy, and whatever good things he did, don’t change the fact.

It’s worth noting that Steve Jobs did give some money to charity, but every old granny in the world who puts a dollar in a collection plate at church gives a higher percentage of their income to charity than he did. I don’t want to sound ungrateful or discourage billionaires from giving to charity, but at the same time, I can’t give them too much street credit when they’re giving away money they were never going to spend anyway. They didn’t lose anything by giving to charity, but they got a lot out of it in the form of lucrative tax breaks and a reputation for being generous. At any rate, if you have billions of dollars to give away, why not just cut out the middle man and leave that money with either your workers, customers or both? Does it justify burning your workers and customers if you’re nice to other people?

I haven’t heard any news about Steve Jobs leaving all of his money to charity after his death, but other billionaires have contrived a reputation as saints for making that claim. I don’t believe billionaires deserve praise for this either, because it’s tantamount to cruising down the street in a stretch Hummer limousine drinking a glass of $10,000 wine and shouting at homeless people through the sunroof, “You’ll get my money when you pry it from my cold, dead hands!” I fail to see the honor in that sacrifice, not that Steve Jobs was even that generous.