4 Reasons Soldiers Are As Much Victims As Heroes

Note: I served in the U.S. Air Force from 2000-2007. My AFSC was 3C0X1 (Communications computer systems operator). My highest rank was E-5 (Staff Sergeant), and I received an honorable discharge.

1. Many soldiers are victims of economic oppression.

Many soldiers didn’t join the military out of patriotism or the selfless desire to defend other people’s freedoms. Many soldiers joined the military for a job; they choose to lock themselves into a nearly unbreakable contract doing an extremely stressful and potentially fatal job because they were poor. They did a cost/benefit analysis of their options in life and came to the conclusion that the risk of dying outweighed the cost of trying to scrape through life in an economic system that shamelessly exploits the poor and limits upward mobility to those who can afford prohibitively expensive college degrees.  Any honest military recruiter can corroborate this…though any drill instructor will tell you that there are no honest recruiters.

A military recruiter will likely try to spin this sad fact of life by saying it just proves how great the military is because it saves poor people from a life of destitution, but the only reason the poor are running from a life of destitution is because the political leaders that the military defends are too corrupt and unqualified to create a system where everyone has an equal chance at success. 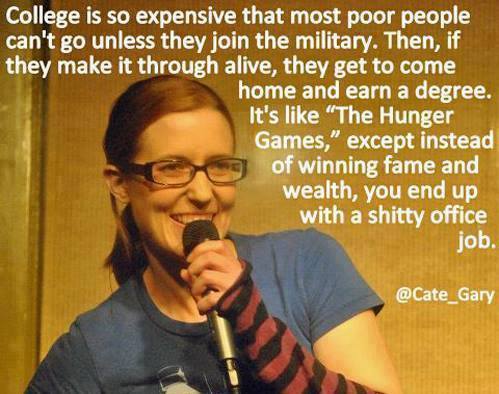 2.  The sole purpose of basic training is brainwashing.

Professor Margaret Singer summed up the definition of brainwashing this way, “Coercive psychological systems are behavioral change programs which use psychological force in a coercive way to cause the learning and adoption of an ideology or designated set of beliefs, ideas, attitudes, or behaviors. The essential strategy used by the operators of these programs is to systematically select, sequence and coordinate many different types of coercive influence, anxiety and stress-producing tactics over continuous periods of time. The techniques fall into seven main categories:

2. Social isolation is promoted. Contact with family and friends are abridged, as is contact with persons who do not share group-approved attitudes. Economic and other dependence on the group is fostered.

4. Make the person re-evaluate the most central aspects of his or her experience of self and prior conduct in negative ways. Efforts are designed to destabilize and undermine the subject’s basic consciousness, reality awareness, world view, emotional control and defense mechanisms. The subject is guided to reinterpret his or her life’s history and adopt a new version of causality.

5. Create a sense of powerlessness by subjecting the person to intense and frequent actions and situations which undermine the person’s confidence in himself and his judgment.

6. Create strong aversive emotional arousals in the subject by use of nonphysical punishments such as intense humiliation, loss of privilege, social isolation, social status changes, intense guilt, anxiety, and manipulation.

7. Intimidate the person with the force of group-sanctioned secular psychological threats.

These tactics of psychological force are applied to such a severe degree that the individual’s capacity to make informed or free choices becomes inhibited. The victims become unable to make the normal, wise or balanced decisions which they most likely or normally would have made, had they not been unknowingly manipulated by these coordinated technical processes.” Source

When civilians sign up for the military they sign away most of the civil liberties guaranteed to everyone in the universal declaration of human rights. Many of those soon-to-be-soldiers weren’t aware of all the rights they were giving up until after they locked themselves into a legally binding contract. No military recruiter will tell you that you have to read the Uniform Code of Military Justice before enlisting.

Once you sign your rights away, you literally became the property of and wholly subject to the domination and influence of the U.S. government. That’s literally the definition of slavery. That’s not speaking metaphorically or bending words in any way. Soldiers are slaves. Period. Slavery is still legal in the “land of the free” because soldiers are slaves, and if living in bondage wasn’t unethical enough, the systematic brainwashing soldiers are subjected to manipulates them into loving and celebrating their slave-hood. So soldiers are mental slaves as well as legal slaves.

The fact that the military pays its slaves relatively well and are only subject to slavery for a few years doesn’t change the fact that they’re still slaves. Even if you disagree with the use of the term “slave,” the point remains that they still lose an inhumane, unjust and undignified amount of freedom when they join the military. Granted, some people actually enjoy this way of life, but even if they love and embrace it, that still doesn’t change the fact that they’re slaves and have lost civil rights that were supposed to be guaranteed to all human beings.

Many soldiers sleep well at night believing they’re liberating the oppressed and protecting civilian’s freedoms even if they were once civilians who have now had their freedoms taken away from them and are now being oppressed.

Let’s assume for the sake of argument that the U.S. military is officially number one in serving mankind in airlift operations to flood victims, food supply, and rebuilding communities around the world. True as that may be, the U.S. military is currently number one in exporting war, destabilizing regions and killing civilians. A few token presents don’t make up for that fact.

It’s also arguable how much soldiers serve the American people. Every dollar spent on the military is a tax dollar not spent on education or social services. What do the American people get in return for spending all their taxes on fighting phantom enemies around the globe? They get crumbling schools and potholes in their roads.

This would be justified if it kept Americans safe and secure at home, but look at Osama Bin Laden. He said himself that the September 11th terrorist attacks were in response to America meddling in Middle Eastern affairs. America’s response was to jump into the Middle East with both feet and grow roots. I’m not going to argue whether or not that was the right thing to do, but I will argue that the more bases the American military opens on foreign soil and the more people they kill the more it will piss off the rest of the world and make terrorist attacks more likely.

And since the military is bleeding the American taxpayers out of vital civil services the military is creating ripe conditions for poverty back home, and with poverty comes crime and bloodshed. So even if the U.S. military kills every terrorist in the world it will come home to find a collapsed system where more and more houses have bars on the windows and the police are stretched thin dealing with violent crimes. Every soldier needs to seriously ask themselves if they’re really giving or taking more from the American taxpayers.

Look past all the military propaganda about military patriotism, freedom, and liberation. Analyze the events leading up to every major military action taken by the United States of America. Analyze the outcome of every major U.S.  military action and you’ll find very little evidence to back up the claim that the U.S. military’s primary mission is to protect freedom or anything else universally idealistic. What you will find is a consistent theme of war profiteering. Every time America goes to war the rich get richer and the poor get poorer…assuming the poor survive the collateral damage; there are millions who haven’t, and there are millions more who won’t if business continues as usual. If you’re skeptical about this claim (and you should be) then do your research. If you study the facts and not the propaganda you’ll find that everything said here is true.

So the question all of this leads up to is: If someone orders you to kill someone else and tells you it’s for a very, very, very good reason and you do it with the best of intentions but it turns out that you were lied to and actually killed an innocent person then does that make you a hero, a murderer or a victim? I know it doesn’t make you a hero. I don’t know if it makes you a murderer, but I do know that it makes you a victim.

This entry was posted on Thursday, October 5th, 2017 at 10:53 pm and tagged with deception in recruiting, don't join the military, flaws in american government, military culture, Military Oppression, reasons not to enlist, soldiers are poor, ucmj, uniform code of military justice, unjust laws, us military and posted in Military Mind Control. You can follow any responses to this entry through the RSS 2.0 feed.
« Every Civilian Owes Every Troop A War Debt
Similarities Between Military Tech School And The Stanford Prison Experiment »