Cops Who Beat Up Protesters Are Defending Oppression

Protesters look great on TV; they look like harmless, courageous, peace-loving, innocent civilians doing their civic duty, and while that may be true on some level, police don’t have the luxury of assessing the situation from their living room. I imagine police are a lot like soldiers who have seen combat, and now, even when they’re on civilian time in civilian clothes, they’re still on edge in large crowds of people because they understand that people are dangerous, and a lot of people are really dangerous.

I understand police took an oath to perform a role in society in the name of order, and part of that oath was to follow orders. I know that the police force has its own internal culture full of customs and courtesies built around rank and protocol. As a result, the police feel a deeper sense of pride and satisfaction in performing their job and following orders than say the average civilian working in the bowels of a giant, faceless corporation.

So I have sympathy for police who approach a once peaceful and orderly street to control a stampede of potential lunatics, many of whom are dressed like lunatics. I understand that when police get the order to clear uncooperative protesters out of an area by any non-lethal means necessary, that’s pretty close to getting a commandment from God; that order came down from the mayor to the head of the law enforcement organization all the way down the chain of command to the police on the scene. The cost/benefit analysis of following that order is stacked heavily in favor of doing so, especially because officers who don’t, will get in trouble. In a best-case scenario, this would prevent them from getting promoted later. In worst-case scenarios, they could lose rank or even their job.

From a practical, stoic point of view, it’s logical to beat up and arrest nonviolent protesters in the heat of the moment, but that’s a narrow point of view that ignores the bigger picture. Let’s take a step back and look at the situation from a broader view. Protesting and rioting aren’t normal. Sitting at home watching TV, shopping, visiting friends and having sex are normal. That’s what people want to do with their free time, and people are really lazy. They’re too lazy to open a can of pre-cut tomatoes without an electric can opener. So when people turn off the television and take to the streets it’s because there’s something really, really wrong in their lives that they want…nay, need fixed, and the more people there are protesting, the more likely their grievances have merit.

Their grievances are especially poignant when they concern inhumane government policies because the chain of command the police follow leads straight up to the civil government. So when police beat up, arrest and disperse nonviolent protesters for protesting against inhumane government policies, then the police become the tools of oppression. They’re directly enabling those inhumane policies to continue destroying people’s lives, and preventing people from speaking out against those inhumane policies is the very definition of suppression of free speech. 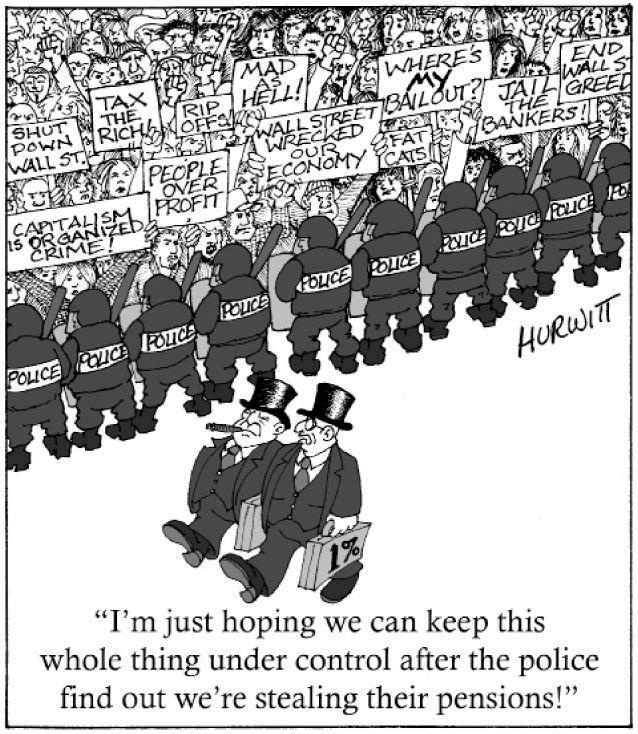 This is self-evident in theory, but on the streets it becomes clouded. You can arrest a protester for a million seemingly logical reasons. Maybe they don’t have a permit to gather. Maybe they’re outside the approved protesting cordon. Maybe they’re wearing a mask. Maybe they shouted a threat or it sounded like they did. Maybe they raised their arms above their head in a threatening gesture. On the surface, these seem like practical reasons to arrest people, but if a protest can be dispersed by using all these little justifications then the end result is that the police silenced the people’s voice in government by terrorizing them. By enforcing rules like these the police are telling people that if they attempt to make their voice heard then the government will send thugs to silence them under false pretenses in a way that absolves the government of the crime of suppressing free speech and makes offenders out of protesters. That’s how protesters have to see the police on the street.

That’s not what the police signed up for. They took an oath to serve and protect people. It’s more than a slap in the face to the police force to order them to violently suppress free speech in the name of peace and freedom, but that’s exactly what’s happening in America today.

I thought we were passed this phase of history. All my textbooks in school said the days of cops beating up citizens trying to hold their politicians accountable to the basic principles of human rights was over. I wonder how many more skulls the police have to crack before they just let the people have their voice. I wonder if the police will ever collectively come to the conclusion that maybe if they just let the people get what they want from the government then they’ll all go back home to their TVs, friends, and lovers and be happy and not go outside and cause trouble anymore.

What the police force should be doing is helping the protesters organize. We all just want the streets to be safe. We’re on the same side fighting for the same goal. Why can’t we work together?

This entry was posted on Monday, October 16th, 2017 at 12:57 am and tagged with abuse of power, american exceptionalism exception, flaws in american government, law enforcement, police culture, police protest, police violence, protests and riots, unjust laws and posted in Police Brutality. You can follow any responses to this entry through the RSS 2.0 feed.
« An Intervention With The Police
Should Police Enforce Unjust Laws? »