A few years ago I posted a blog about why I don’t like going to strip clubs. Here’s the last paragraph if you don’t have time to read the whole thing:

“So basically, when you ask me if I want to go to a strip club you’re really asking me to pay a shit load of money to get sexually frustrated by a bunch of resentful liars who look down on me and won’t hesitate to make me feel guilty if I don’t give them what they want. Why don’t I just go in the bathroom and flush my money down the toilet while punching myself in the balls and shouting self-deprecating remarks at myself in the mirror? At least then I won’t have to leave the house.”

To truly understand the positive side of the strip club business, you have to look past the window dressings and see the issue for what it really is, and the real issue is nudity. Public nudity. Now, here’s the thing about public nudity: everybody was born naked. Clothing is a lie. I’m not saying clothes aren’t useful or necessary. I wouldn’t walk around naked all the time, but the fact remains, clothes are a human invention designed to hide the way we really are. The only reason we feel ashamed of our bodies and terrified of other people’s bodies is because humans decided (on their own, without any help from any frigid God) that our nature is taboo. Our ancestors came up with this dumb ass idea back in the caveman days, and we’ve passed that dumb lie down from generation to generation ever since. We’re so used to it that we accept it completely. People rarely question the dumb ass taboo on nudity because we’re raised to believe that it goes without saying that nudity is unnatural and taboo. We’re all so dumb that we’ve convinced ourselves we live in a bizarro universe where natural nudity is unnatural and unnatural clothes are natural. We’re all so convinced of this dumb ass illusion that we actively believe (or at least passively accept) that the government has a moral obligation to protect us from ourselves to the extent that the government can literally throw women in jail for taking their shirts off in the same places men can take their shirts off.

Have you ever heard the song, “Doo Wop, That Thing” by Lauren Hill? We’re so afraid of our own sexuality that we can’t even say the word “sex.” Notice how there’s never any sex in fairy tales for children? Notice how shocking the very idea of having sex scenes in fairy tales is? But what do you think the spoiled princess and the subservient knight are going to be doing for happily ever after? They’re going to be fucking, and it’s not always going to be porcelain doll sex. After the salad days are over and they start getting bored of their sex life they’re going to look for ways to make it more exciting. They’re going to let down their pretenses about being goody-two-shoes, and for the vast majority of their marriage, they’re going to be fucking like two elephant seals fighting over territory. Oh, they’ll do things with their bodies they wouldn’t tell their mothers about. In fact, there will be blood. But that’s not even the worst of it. For example, when prince charming gets old he’s going to walk around the palace naked with his old, hairy balls dragging behind him, and when the princess gets old her vibrant tropical flower is going to wilt and to the point where it looks more like an elephant’s mouth, and even after it the princess gets so old that her tropical flower has gone from an elephant’s mouth to an old pile of dusty chicken skin,  she’s going to keep banging prince charming like an elephant seal.

That’s the unmentionable reality, but kids have no idea what’s in store for them because we keep feeding them this Disney crap version of reality where sex and nudity don’t exist and everyone is a Southern Baptist. Raising children on this bizarro version of reality sets them up for sexual failure and frustration later in life.

That old librarian, that dilapidated toll booth attendant, the old folks who you go to get your vehicle permits and government benefits forms from, the princess in the front row of the class, the geek in the back, the teacher…they’re all sex addicts.And the ones who aren’t, are in a lot of pain because they’ve brutally suppressed their own nature through self-denial and self-punishment. And yet we all walk around acting like Southern Baptists when we’re really sex addicts.

Sex is natural. Nudity is natural. Our sexual desires are as natural and as vital as the need to eat, drink and sleep. If you starve yourself of sexual gratification, then you’ll get hungry and starve.Everybody knows that starving beasts become dangerous predators. That’s why so many priests molest little boys. Raise people on frigid sexual morals that starve them of their natural appetites, and they’ll turn into desperate beasts who will stop at nothing to make the hunger go away. If they don’t end up raping or molesting someone, they’ll become broken inside. Neither of those paths are good or necessary. You know what is good and necessary? The sight of the female form.

Play this song while reading the rest of this blog.

Strip clubs only have a bad reputation because the rest of society still believes in caveman morality. In reality, strips clubs are a beacon of sexual freedom. Their very existence challenges the past and looks to the future, a future where all people can live free from fear and sexual oppression. Sure, on multiple levels, strip clubs are a little depressing, but that’s only because of the caveman sexual morals society imposes on itself.

Once society stops living in the past and legalizes sex and nudity, then strip clubs will be able to blossom to their full potential. When that day comes, men and women will be able to comfortably and guiltlessly marvel at the natural beauty of a med school drop out’s body while having lunch. And that med school drop-out will be able to proudly display the body God (if God exists ) gave her. And the only consequence of one person admiring another person’s beauty will be their mutual enjoyment. If I live to see that day, I’ll lift my glass to both of them and think, “What a wonderful world we share.” 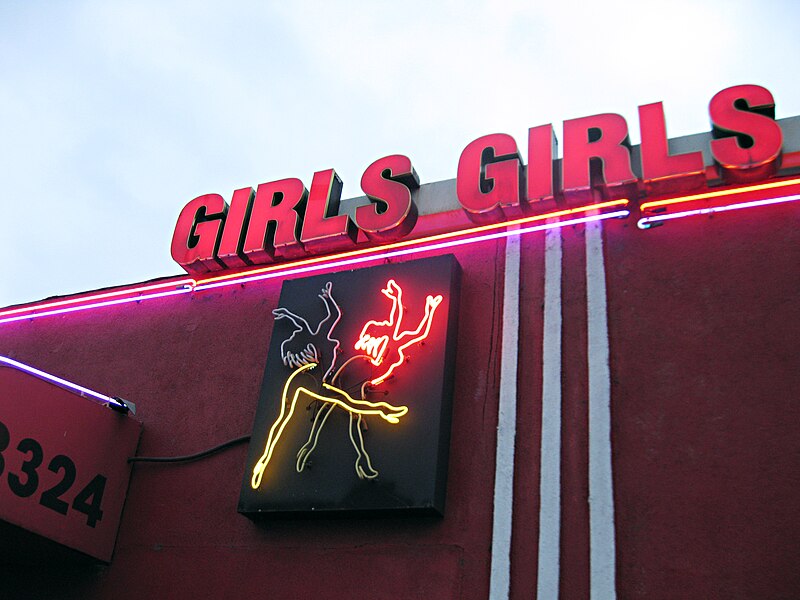