This list comes from my essays on American politics.

This list comes from my essays on the U.S. military and police.

In 2011, I made an illustrated parable explaining the history and future of the internet in response to Congress trying to kill net neutrality with the Stop Online Pirating Act and Protect IP Act. A few years after both bills failed, I deleted this comic because it felt obscure, irrelevant, and fearmongering. Net Neutrality is under attack again. This time, telecom companies have bribed the head of the Federal Communications Commission, Ajit Pai, to use the FCC’s power to do what Congress couldn’t. So I’m reposting this unfortunately still-relevant comic. 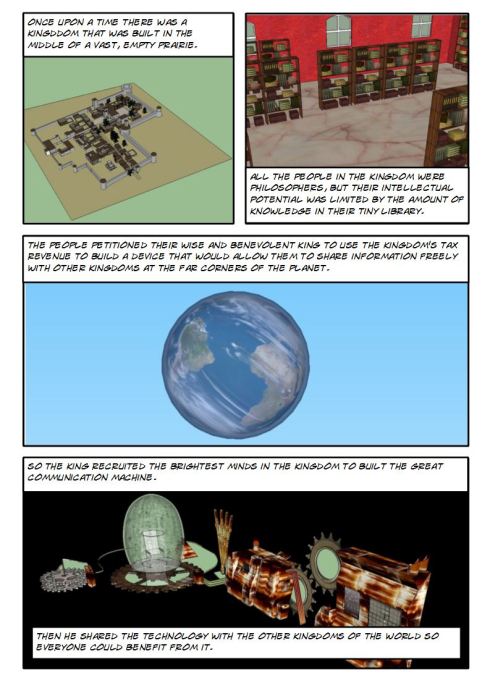 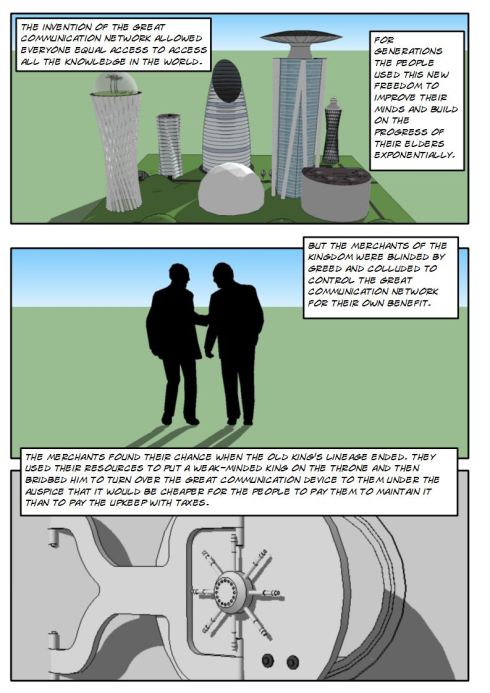 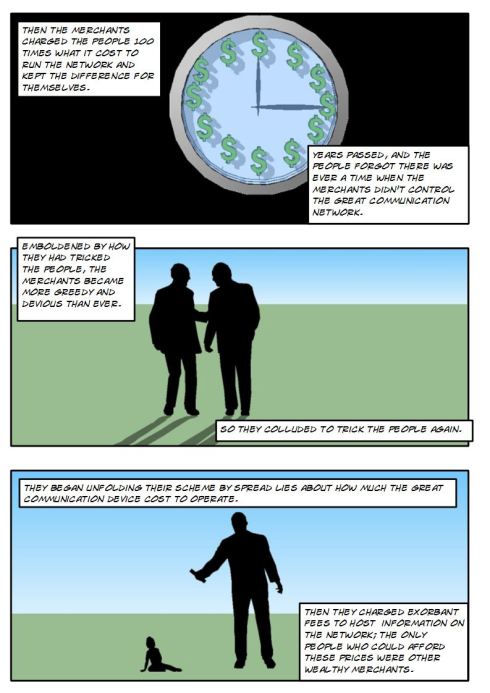 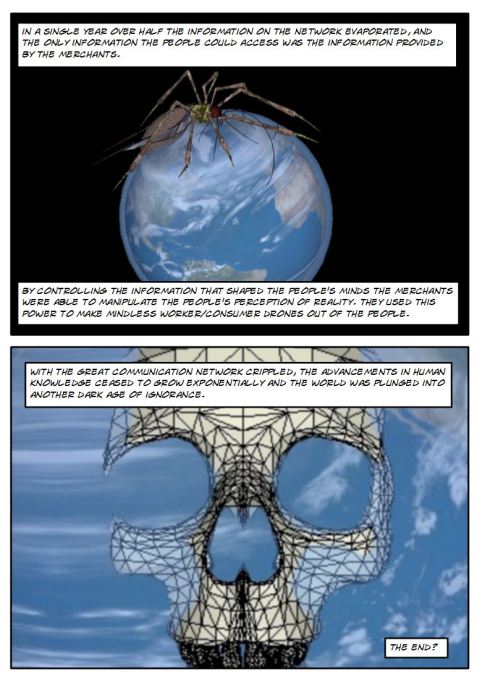 Note: In real life, the internet wasn’t invented because the public demanded it. It was funded and created quietly by the U.S. military and several large universities to transfer military and scientific data. I changed this in the story for the sake of brevity.

If you enjoyed this comic, you’ll also like these:

An old man sits on the steps to his apartment and explains life to an eight-year-old boy.

The Adventures of Monk and Punk: Journey to Entlantis

A homeless monk and an alcoholic punk team up to create a publishing house to raise money to build a floating monastery.

This Was Your Life

41 Major Crimes Against Humanity Committed By The U.S. Government Since 1945 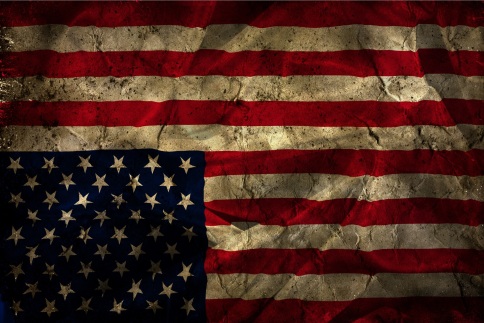 Every American civilian and soldier who has blind faith in the moral, cultural and political supremacy of the United States of America must not be aware of the atrocities the American government has committed in the past 70 years alone. Below is a list of major crimes against humanity that America has committed that we know about. These aren’t isolated incidents or accidents. They’re the product of systemic flaws in the American system. The call to action they raise isn’t to overthrow the government. They’re simply pointing out that America needs major change that its electoral system can’t and won’t provide. Until major changes happen, it would be naive to condone jubilant patriotism in the American system.

2015- The wealthiest 1% of the American population own more wealth than the other 99% combined.

2015– America has officially killed about 1,000 civilians (of which 200 were children) using drone strikes.

2015– Led by America, politicians from several nations signed a secret bill into law that gives corporations unprecedented legal power to manipulate market prices and sidestep laws that stand in the way of corporate profit.

2015– America armed ISIS, who uses those weapons to commit crimes against humanity. This also gives the American industrial war complex justification to escalate war spending in the Middle East.

2014– The Affordable Care Act (AKA Obamacare) forced every American citizen to buy health insurance that has such high deductibles it’s basically useless. Anyone who can’t or won’t pay is fined.

2014– The CIA released a report detailing torture at the U.S. military base, Guantanamo Bay, which is located in Cuba so that it falls outside the jurisdiction of U.S. law.

2013– Edward Snowden leaked classified documents that revealed America is secretly spying on its own citizens. The government labeled him a traitor instead of a whistle blower. Now Edward Snowden hides from American “justice” in Russia.

2013– Bradley Manning (now Cheslea Manning) leaked classified documents revealing America was committing war crimes in Iraq. The government labeled him a traitor instead of a whistle blower and locked him in solitary confinement.

2011– Congress attempted to pass the “Stop Online Pirating Act” but failed to pass the bill after widespread public outcry. The bill would have allowed large corporations to control which websites the public has access to.

2011– Thousands of protesters camp in the financial districts of major cities across America to protest how the wealthiest 1% of the population controls the government through lobbying and campaign financing. The police in each city brutally crushed the protests.

2010– President Obama signed the Dodd-Frank Act into law, which was supposed to limit unethical behavior by banks, but lobbyists influenced the wording of the bill to be essentially useless.

2008– The U.S. Air Force killed 90 civilians in an airstrike in Azizabad, Afghanistan

2008– Banks that went bankrupt from committing fraud and other risky practices were bailed out by the government, and the banks executives received lavish bonuses.

2008– America officially has the largest prison population in the world, officially making it Orwellian to call America, “the land of the free.”

1991-2003 Saddam Hussein invaded Kuwait. At the request of the Kuwaiti government, the American military defeated the Iraqi military, but president George Bush Sr. left Saddam in power though because his administration knew that removing him would create a power vacuum that would destabilize the Middle East. In 2003 President George Bush Jr. invaded Iraq again and removed Saddam from power under the pretense that Saddam’s military possessed weapons of mass destruction that posed an imminent threat to America. This destabilized the Middle East, and over 100,000 people have died from the sectarian violence that followed. It later came to light that America new Saddam didn’t have any weapons of mass destruction, and the Bush administration knowingly lied about their justifications to go to war.

2001– Congress signed the Patriot Act into law, which eliminated the American public’s right to privacy and gave the government broad powers to label anyone terrorists.

2001– Congress passed the “No Child Left Behind Act,” which reduced public education to an endless series of rote tests and sold out the education system to private testing companies.

1997– Corrections Corps of America, a private prison company, went public and sells its stock on the stock market. Since then it has spent millions of dollars lobbying congress to keep drug laws tough in order to keep its prisons full.

1988– America sold chemical weapons to Iraq that it knew would be used against Iran.

1986– The CIA attempted to overthrow the Nicaraguan government and sold weapons to Iran to raise money to covertly fund Nicaraguan rebels.

1973– President Nixon personally oversaw the overthrow of the Chilean government.

1932-1972– The U.S. Public Health Service studied African Americans with syphilis and denied them effective treatments to further study the progression of the disease.

1971– The British military removed all the inhabitants of the island of Diego Garcia and gave the island to America to use as a military base, which is still operational.

1964– The U.S. Navy created a false flag attack on one of their ships on the Gulf of Tonkin to justify going to war with Vietnam.

1961– The CIA attempted to overthrow the Cuban government, which wasn’t democratically elected; it was created after local freedom fighters ousted the puppet government run by America.

1960’s– The DoD sprayed multiple U.S. Navy ships with various chemical and biological agents to test their effect on the sailors.

1954– The CIA overthrew the democratically elected government in Guatemala

1953– The CIA tested LSD and other drugs on unsuspecting civilians

1953– The U.S. Army tested biological and chemical weapons on its own troops.

1953– The CIA overthrew the democratically elected government in Iran.

1951– America created the Uniform Code of Military Justice, which exempts military personnel from being protected by the Universal Declaration of Human Rights.

1950– The U.S. Navy sprayed bacteria over San Francisco to determine its viability as a biological weapon.

1948– America and its allies backed the creation of the country of Israel, which killed or displaced 700,000 Palestinians in its first year of existence. Since then, with America’s protection, Israel has killed and displaced millions more. Those who remain in their homeland live in concentration camp-like conditions.

1898– America sent warships to the island of Oahu, Hawaii. The Navy arrested the Queen of Hawaii and forced her to annex the Hawaiian islands to America.

If you want a list of crimes committed by America dating farther back, read “A People’s History of The United States” by Howard Zinn