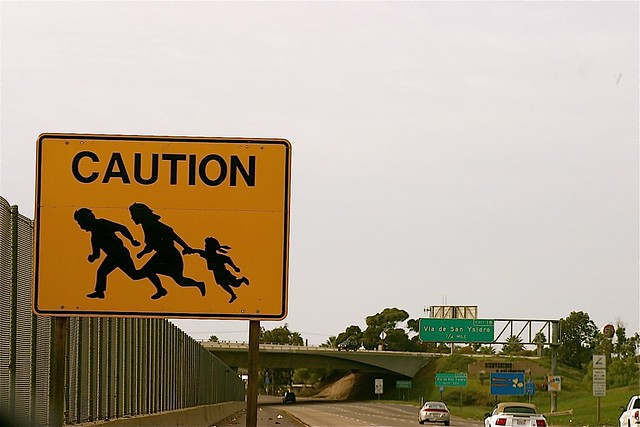 The world is a confusing place, and there’s so much disinformation and misinformation pushed in our faces every day it’s hard to tell reality from fiction. Here’s a little trick that will help you see through a lot of the illusions. Social issues always involve multiple people, usually from multiple groups. These different people from different groups get differentiated with labels like gay, straight, American, Korean, president, citizen, soldier, officer, enlisted, supervisor, immigrant, owner, renter, customer, capitalist, communist, etc. These labels have their uses, but sometimes they confuse the real issue more than they clarify it. If you ever run into an issue you don’t understand, try replacing all the labels with the term “human being.”

Let’s apply this concept to political borders. Suppose your child asks you this question: “Why aren’t Mexicans allowed to move freely into the United States, and why are the Mexicans who sneak north across the border paid slave wages and not given any employee benefits while people born in the United States are guaranteed a higher minimum wage and certain benefits and protections from their employers?”

When you do that, the question sounds absurd… because it is. But that’s hard to see when you fog reality with arbitrary labels. The truth is our passports are lies that perpetuate a false and inhumane reality. They’re not designed to help us get around the world. They’re designed to limit our freedom to travel, which limits our freedom to choose where to live, which limits our freedom to choose which laws we live under, which rights we have and probably most importantly, who we work for and who we pay taxes to. Borders don’t keep bad people out, they keep taxpayers in.

Any country that truly believes in freedom would open its borders unconditionally, but no country in the world has done that because it would free the human beings from the stranglehold that rich human beings have on poor human beings. Eliminating borders would give human beings the ultimate power to veto their corrupt leaders by simply leaving.

If that were possible, then rich and powerful human beings wouldn’t be able to create trade restrictions and sanctions that exploit human beings from poorer nations. The corrupt leaders from those poorer nations wouldn’t be able to exploit their own people or rule them with brutal force. People wouldn’t sit around saying to themselves, “Oh, the world sucks but what can we do about it?” They would simply leave and go live under the laws of a more just nation, and no leader wants that.

If we are all truly human beings, what right does one human being have to tell you where you can live? In truth, they have no right. All they have is the authority you give them over you. Unfortunately, so many people believe the lie of political borders and help enforce it that they make the lie real, and in doing so we eliminate our own freedom to travel, to choose which laws we would live under and which dictator’s regime we fund with our taxes. That’s the reality we’ve created for our children to grow up in.

This entry was posted on Wednesday, October 25th, 2017 at 5:04 am and tagged with absurd laws, American Laws, border control, border wall, controversial political topics, illegal immigrants, immigration, law improvements, legal reform, mexican immigrants, needed laws, unjust laws and posted in American Laws, Racism and Xenophobia. You can follow any responses to this entry through the RSS 2.0 feed.
« Floyd Mayweather vs. Conor McGregor: A Cautionary Tale
How You Can Help The Wise Sloth Enlightentainment Revolution »

3 responses to “Borders Are Inhumane”