What Should Xenophobes Do About Trump?

Trump’s campaign slogan, “Make America Great Again,” means something different to each of his supporters. Some want America to be white again. Others want it more Christian. Most, at least don’t want into to change any more than it already has. Anyone who identifies as a conservative wants to preserve their traditions. That’s what the word means.

Unfortunately, this is the worst time in history to be conservative, because the internet has changed our lives exponentially faster than anything any of our ancestors ever experienced. Cultural evolution that once took a lifetime now happens in a year. After the internet age is over, and we move into the space age, culture probably won’t evolve this fast again. It will level out eventually, but humanity is waking up from history right now and suffering rapid growing pains.

Dismantling traditions and installing new cultural foundations is existentially traumatizing for everyone, but the more you base your identity on your affiliation with tradition, the harder it is. The internet remembers how conservatives reacted to gay marriage, the end of “Don’t Ask, Don’t Tell,” trans-gender acceptance, drug legalization, the New Atheist movement, religious equality, and a black president. 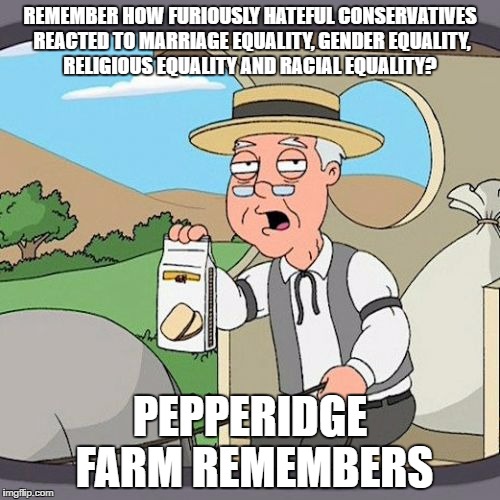 Conservatives have been pissed. So it’s unsurprising many who don’t even like Trump as a person, still voted for him. He was the only candidate promising to bring back the good old days, but Trump can’t stop cultural evolution, and it wouldn’t benefit humanity if he could. In order for society to grow, it must change.

Society is just the sum of the individuals within it. So for society to grow, the individual must change. The reasons humans tend to resist change is because our brains are designed to reward us for repeating the past and rejecting the unknown. This is an evolutionary instinct that has helped humanity survive by guiding us to do what experience has taught us works, but traditions aren’t sacred. They’re man-made tools that become obsolete the moment the environment we invented them to survive in, changes. Conservatives’ hearts are in the right place, but we live in a new world that requires new tools.

The truth is, America was never a white, Christian nation. It’s always been a melting pot, and now that the internet is streaming global ideas into American’s smartphones twenty-four hours per day, our minds are more diverse than ever. The radical feminists on the left who demonize cultural appropriation are just as wrong as conservatives who want to force all Americans to live by their parents’ values. Cultural diffusion takes the best aspects of multiple cultures and infuses them into a more complete one.

You don’t have to believe my theory on cultural evolution, but you owe it to humanity to look at yourself from your enemy’s point of view. To put this in a way American patriots can understand, Trump’s red MAGA hat is the new red coat. That’s how it looks to homosexuals, transgender people, Atheists, and Muslims.

Conservatives are literally fighting to take their freedoms away and acting like the victims because they’re losing the freedom to repress other cultures. Modern Americans can’t abide being legally side-lined any more than America’s colonists could endure taxation without representation. Those fighting for a multicultural nation are on the right side of history, and America will never be great as long as conservatives are waging a perpetual cold civil war against everyone who isn’t exactly like them.

Frankly, the culture war is already over. Tradition lost, as it always does on a long enough timescale, but it’s not dead, just diffused into the melting pot. Hank Williams Sr. is never going to top the country music charts again, not because liberals are holding white culture back, but because young white people can’t relate to it. The country Millennials grew up in looks and sounds like Bro Country. The Baby Boomers aren’t carrying the torch anymore. These guys are:

Living in the past won’t stop what’s already happening, and there will be no savior coming to reanimate the conservative dream, especially not Donald Trump. If you think he represents conservative values, then wishful thinking has clouded your judgment. He blatantly doesn’t hold any conservative values, which is to be expected, because he wasn’t raised in conservative culture. Baby Donald grew up in the land of the financial elite, and his values reflect theirs. Trump’s whole life is a testament to the gospel of money. His track record indicates his prime prerogative is to make the rich richer again, and the team of financial elites he’s assembled from his (not your) good ol’ boy network to serve in his (not your) administration confirms it.

Trump will lower taxes, but he’ll cover the cost by increasing the national debt. That will create jobs, but they’ll be dead-end ones. This will make investors rich by stimulating the economy, but most of the economic gain will get sucked up into the bank accounts of his friends, leaving anyone currently living in a trailer house, stuck there struggling to pay off their last car repair bill, let alone save money for a real home, which they’ll never be able to afford because of the government’s mortgage laws that Trump won’t change.

Losing your culture means losing your way of life, which feels like death, but losing your savings means losing your ability to live, which quickly leads to death. Arguing about issues as important as gun control, abortion, and illegal immigration is like colonial slaves arguing morality in between their never-ending trips to the cotton fields.

The culture war is a distraction from the economic war the 1% are waging on everybody else. If conservatives hope to save that which is most important to them, they need to lay down their arms and unite with their fellow debt slaves.

The power of a group is only as good as its leaders. Right now, conservatives don’t need cultural representatives. They need economic representatives: intellectuals from the working class who know how to fix poverty. Seriously, you could walk into any small town bar and find someone more intelligent, moral and in-touch with the working class, than Sarah Palin or Donald Trump. But the DNC and RNC will never nominate your hometown geniuses for any election unless they sell out. Expect the system to keep giving you leaders like Sarah Palin, Donald Trump, Hillary Clinton and Barrack Obama. If conservatives want to see good change in America, they should stop giving money and support to the RNC and encourage liberals to boycott the DNC for not representing their values or needs either.

Conservatives are pissed for all the same reasons the Occupy Wall Street protesters were. Possibly the best way these two factions can solve their mutual problem is to come together in an Occupy Main Street protest, where, instead of trying to create a movement without leaders, they focus on finding the best and brightest minds from the city and the country to be the common man’s voice. Then, before the 2020 presidential primaries, stage a unified Occupy-style protest at the White House so large, there isn’t enough tear gas in the police’s war chest to disperse it. Then we tell the RNC and DNC that they don’t get to tell us who their nominees are anymore. From now on, the people will be endorsing their own nominees.

Think about this for as long as you defend Trump. You may have won by electing Trump over Clinton, but if the RNC had let you pick the presidential nominees, there are a million people you would have voted for over Trump. In that regards, you didn’t win an election. You fell for a bait-and-switch scam.

The problem isn’t you. America keeps falling for the RNC’s and DNC’s two-man con game. The question isn’t, which victim is more wrong, but how many times are we going to keep falling for the same trick?

This entry was posted on Wednesday, October 18th, 2017 at 6:01 pm and tagged with 45th president, american politicians, corruption american government, Donald Trump, how to solve the world's problems, reaction to trump presidency, trump analysis and posted in Donald Trump. You can follow any responses to this entry through the RSS 2.0 feed.
« 4 Reasons Americans Shouldn’t Accept Trump As President
What Should Racists Do About Trump? »