Everything Wrong With America’s 2016 Presidential Primaries 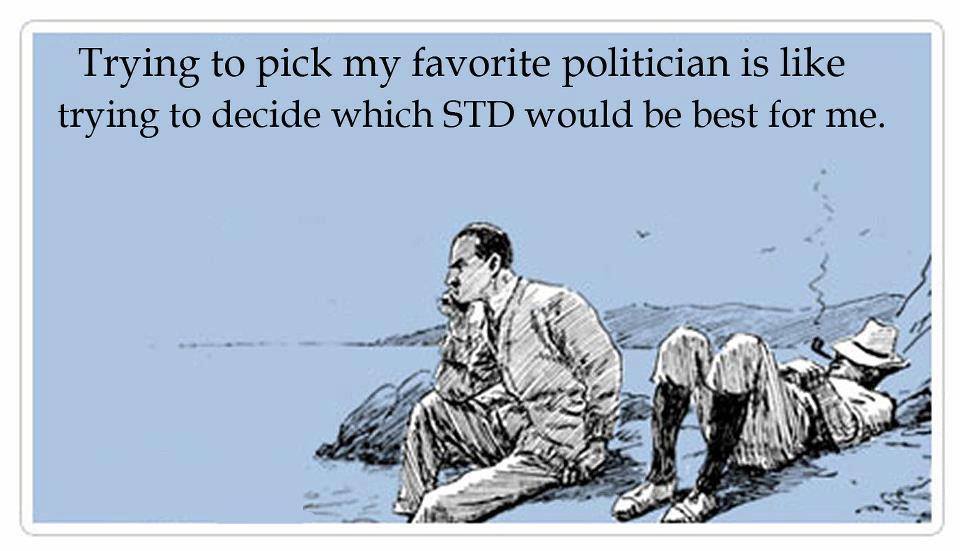 Understanding the gravity of the situation, the current list of potential candidates for the 2016 presidential election should make you sad and scared.  None of them are up to the task of representing the American people let alone setting foreign policies that treat the rest of the world respectfully and humanely.

At least five of the Republican nominees (notably George Pataki, John Kasich, Jim Gilmore, Carly Fiorina, and Ben Carson) don’t stand any chance of winning. They don’t have the money, name recognition or leadership skills necessary to win the election let alone run the most powerful country in the world. Any political advisor with a high school diploma knows this. Their political advisors know this, which raises the question, why are they running? The best case scenario is that they’re doing this as a publicity stunt to improve their existing careers. The worst case scenario is that they’re acting like members of a NASCAR team who have no intention of winning the race and are only in the competition to get in the way of their teammate’s competition. Either way, their presence in the race reveals how America’s presidential elections have devolved into a corrupt theatrical performance.

At least six of the Republican nominees (notably, Rick Santorum, Scott Walker, Rick Perry, Mike Huckabee, Ted Cruz and Bobby Jindal) are Christian zealots who want to inject their religious values into law. They believe that since America was founded by Christians, and the majority of Americans today are Christian that means it’s only just that the laws of America reflect Christianity, but this ignores the fact that America is full of non-Christians who don’t want, and shouldn’t have to, live under the Christian equivalent of Sharia law.

Even if America were a Christian nation, there are more important issues that the American people need their president to focus on besides taking America back to the dark ages. Even if there were a reason why the American government should be more Christian, all of the Republican candidates are rich and powerful liars who are serving themselves and paying lip service to their professed faith. The only Christian issues they talk about are a few cherry-picked items that are popular with their voting demographic. These men are a danger to non-Christians, and they lack the integrity to represent real Christians.

With the exception of Donald Trump and Ben Carson, all of the Republican nominees are professional campaigners. They’ve all built their careers on contributions from wealthy donors. They’re all compromised and have long histories of not acting in the best interest of the common man. None of their solutions to the American people’s problems address the root cause of those issues: economic inequality, which should come as no surprise since they’re all indebted to the people who create and sustain economic inequality… people like Donald Trump.

Donald Trump was born to rich parents and inherited the business they built, which he made even more profitable by underpaying his workers, overcharging his customers, bribing politicians and hoarding his profits. In the last 1980’s he made national news for throwing a one-night party that cost $1 million. He exploited bankruptcy laws to avoid paying taxes until those laws were changed, and he has donated at least $100,000 to Hillary Clinton in exchange for undisclosed favors. He has also run for president once already as a publicity stunt to boost ratings for his television show, “The Apprentice.”

Donald Trump has no interest in representing the average Americans, but a lot of poor people like him because he speaks frankly. The reason he speaks frankly though, is because he’s not trying to win the presidency. He’s just trying to stay in the headlines to improve his popularity because it’s good for his business. He’s laughing at his supporters all the way to the bank. I’m sure nobody is more surprised than him that he’s made it this far, but he can’t, won’t and shouldn’t go the distance. He’s a farce of a human being, let alone a presidential candidate, and the fact that he is a presidential candidate just goes to prove how farcical America’s presidential elections have become.

I was wrong. Turns out the truth is far worse. Our system is just that broken.

The only other Republican candidate who would do more to help big business crush the poor than Donald Trump is part-time libertarian, Rand Paul who wants to eliminate as much government as possible. While there’s no doubt that big government is a big problem in America, and we definitely need to eliminate a lot of its overreach, die-hard Libertarians want to throw the baby out with the bath water. They believe that once government regulations are removed then the guiding hand of the free market will stop big businesses from committing human rights abuses. But regulations exist, because before those regulations existed big businesses used every time-tested unethical trick in the book to destroy competition and exploit everyone and everything they could to make more profits. Removing regulations that protect workers, customers and the environment will just cause history to repeat itself. Rand Paul won’t be the next president of the USA, but it still makes me sad and frightened that someone who wants to recreate the America that Upton Sinclair described in The Jungle can get this close to the presidency.

The only two serious Democratic presidential candidates right now are Hillary Clinton and Bernie Sanders. Hillary Clinton is the quintessential career politician. Some people like her because they say she has the most political experience, but that just means she has the most experience lining her pockets with campaign contributions, playing the system and becoming compromised. She would win the general election hands down if she simply called herself a Republican instead of a Democrat, because she’s the strongest pro-business candidate of all the politicians who are falling over themselves to work for the ultra-rich. If I had to bet money on who is going to win the presidency, I would bet on Hillary Clinton, because she’s spent the most time and effort courting all the people who directly or indirectly choose who the president will be, and that’s not the American people.

The only candidate in the race who seems to genuinely care about the average American and who is talking about the root causes of America’s problems is Bernie Sanders. I would be more excited about him if we didn’t already hear Barack Obama say all the right things and make all the right promises in his campaigns only to completely sell out to big business the moment he got into office. What few things he did try to accomplish for the common man were completely blocked by all the other politicians who work for big businesses. The exact same thing is going to happen to whoever becomes president, even Bernie Sanders, because that’s how the system is designed to work.

There is no way any presidential candidate is going to represent the American people. That’s not pessimistic. It’s simply the depressing reality of American government. That should make everyone in the world sad and scared.

This entry was posted on Tuesday, October 17th, 2017 at 8:33 pm and tagged with 45th president, american politicians, corruption american government, Donald Trump, how to solve the world's problems, presidential election, reaction to trump presidency, trump analysis, voting and posted in The 2016 Presidential Elections. You can follow any responses to this entry through the RSS 2.0 feed.
« Why It’s Delusional To Vote In America’s 2016 Presidential Election
My Opinion On Online Piracy, Sharing, and Etiquette »