How To Survive The Trumpocalypse 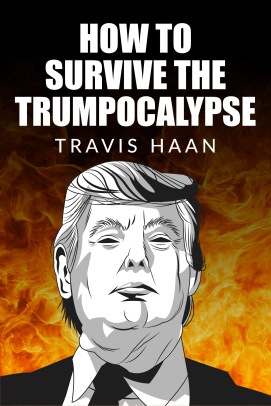 I compiled a collection of blogs I’ve written into an E-book entitled “How to Survive the Trumpocalypse,” which is available on Amazon. Below is the introduction and links to all of the blogs:

This book is a collection of essays I posted my blog, TheWiseSloth.com, between 2010 and 2016. The tagline of the website is, “Enlightenment for the masses,” and its mission statement is, “to provide editorial, philosophical, instructional, inspirational and satirical posts in the form of essays, lists, comics, and fiction, which tend to be irreverent, humorous and controversial.”

I choose the topics I write about by asking myself, “What are the most important questions people need answers to?” So I’ve spent years writing about the root causes of people’s biggest problems, which often boil down to politics and economics.

When major events happen in the world, readers will E-mail me to ask for my perspective, and during the 2016 presidential primaries, I received several requests to explain the candidates and the election in general. In response, I wrote three essays and three comics analyzing the candidates and the political process. In them, I predicted Hillary Clinton would be America’s next president, and I only planned on writing one blog about her victory, because I didn’t have anything to say about her that I hadn’t already said about Barack Obama.

I’d never considered writing a blog about Trump’s presidency, because he was just a bad joke that got taken too far. Then, all of a sudden the joke turned real and wasn’t funny anymore. The internet buzzed for days after the election with people asking what it means that Trump won. How did it happen? What will he do next? What do we do next? Nobody had any idea, myself included. I needed answers to these questions for my own closure.

Initially, I assumed I’d be able to cover the topic in two or three posts, but the end of the rabbit hole turned out to be ten blogs deep. The first four attempted to explain what it means that Trump is president. The last six answered the question, “What should we do about Trump?”

By the time I finished, I realized I had enough content on an important enough topic to make a short book, but after compiling the blogs, I felt the finished product raised more questions than it answered, such as, “How did this happen? What are the stakes? What would happen if we did nothing? Why was I wrong about Hillary Clinton? How far can we question the government? What else can we do?” Since I had already written dozens of posts over the years addressing those questions, I went back and added them to complete the narrative.

The blogs aren’t listed in the chronological order they were written, but each chapter heading includes the date it was originally posted on The Wise Sloth and how many days that was before or after November 9th, 2016, the day of the Trumpocalypse.

Since the essays were originally written to stand alone, some of the information in them is repeated, but it’s presented from different angles in different contexts, which shows how it fits in the bigger picture.

“How to Survive the Trumpocalypse” is divided into seven sections: “Obama’s legacy,” “The root of America’s problem, “What poverty looks and feels like,” “Problems in American culture,” “The Trumpocalypse,” “The moral imperative of civil disobedience” and “What do we do now?”

The book begins with three essays written about/during, Obama’s presidency, because I want to establish immediately that Trump is just a symptom of a bigger problem, which is that America has taken capitalism to its most predatory extreme. All of the essays in the next three sections illustrate how, for the poorest of the poor, living in America has been apocalyptic since 1776.

The “Trumpocalypse” section, which includes all the essays I wrote about/during the 2016 presidential election, leads to the conclusion the reason November 9th, 2016 is such a significant date, is because it was the day America’s economic/political system reached its inevitable conclusion by crowning a corrupt, unqualified, mentally unstable billionaire as its supreme leader. In other words, the system officially endorsed the root of the problem to be the solution.

The government crossed a line allowing Trump to become president. Worst case scenario, the Trumpocalypse was an official declaration of war on the poor. Best case scenario, it was a confession of failure. Either way, now more than ever, every American needs to reassess their perception of reality and start thinking and acting differently, which is why I included the section about civil disobedience.

The solutions I propose in the final section are far-fetched, but I didn’t set the bar so high because I’m naïve. I did it because America has a drastic problem that requires drastic solutions, and lowering the bar isn’t one of them.

My goal isn’t to convince you to believe everything I say. I just want to educate and inspire you. I use a conversational tone and try to inject humor and wit while discussing big topics so you’ll be more likely to read the entire book, think about America’s problems differently and look for solutions nobody has thought of yet.

This entry was posted on Wednesday, October 18th, 2017 at 2:30 am and tagged with 45th president, american politicians, corruption american government, Donald Trump, how to solve the world's problems, reaction to trump presidency, trump analysis and posted in Donald Trump. You can follow any responses to this entry through the RSS 2.0 feed.
« My Opinion On Online Piracy, Sharing, and Etiquette
Why Won’t People Just Give Trump A Chance (The Orphanage Metaphor) »